Network data shows that Venezuela’s state-run internet provider ABA CANTV (AS8048) has restricted access to YouTube, Google services, Bing and Periscope from approximately 3:15 p.m. UTC (11:15 a.m. VET) Thursday 16 May 2019 as Juan Guaidó is set to meet the group of Professionals and Technicians.

The incident indicates a tactical shift toward blocking prior to appearances by Guaidó, instead of after the start of appearances by the politician, with a similar incident of internet filtering observed on Tuesday.

Confirmed: YouTube, Google services and Bing restricted in #Venezuela prior to Guaidó appearance at session with professionals and technicians #KeepItOn 📉https://t.co/NpPMW4EKK1 pic.twitter.com/97BmGwMcSc 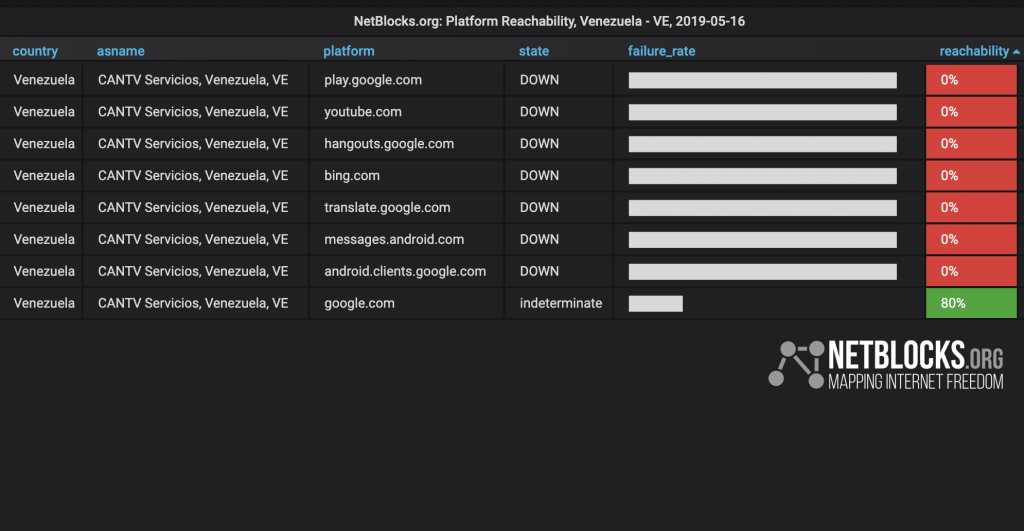 An significant portion of google.com search traffic now also appears to be disrupted in Venezuela as authorities attempt to restrict access to the YouTube live streams, as filters targeting Google’s streaming service appear to have also disrupted the company’s flagship search product:

Data indicate that connectivity was restored in two distinct phases following the end of the speech, lasted 2,5 hours.