The blocks, which lasted from 16:05 UTC to 19:35 UTC (12:05 PM to 3:35 PM VET) coincided with a press conference by Juan Guaidó detailing plans for a national resistance dubbed Operación Libertad. Network data shows that the disruptions are distinct from outages caused by ongoing nationwide power outages.

The findings are based on a set of 2400 network performance and reachability measurements as observed from 120 vantage points across Venezuela. NetBlocks diffscan measurements taken in the same time window indicate that some 70% of Venezuela’s networks were fully offline due to ongoing power outages:

Update: It has been 55 hours since the onset of nationwide power outages in #Venezuela; 69% of the country remains offline after a new drop in connectivity #SinLuz #Apagon #27Mar ⬇️https://t.co/7nhWVW9v7a pic.twitter.com/7trvLoLqjd

The new outages mark the return of ephemeral, or intermittent internet censorship imposed by the state appearing to target critical speech. Data are consistent with previous targeted disruptions during public appearances by the leader, and during sessions of Venezuela’s National Assembly.

Venezuela saw a remission in ephemeral network filtering and blocking of social media and streaming platforms during the nationwide power outages through March. News media and campaign website filters have nevertheless remained in place throughout that period. 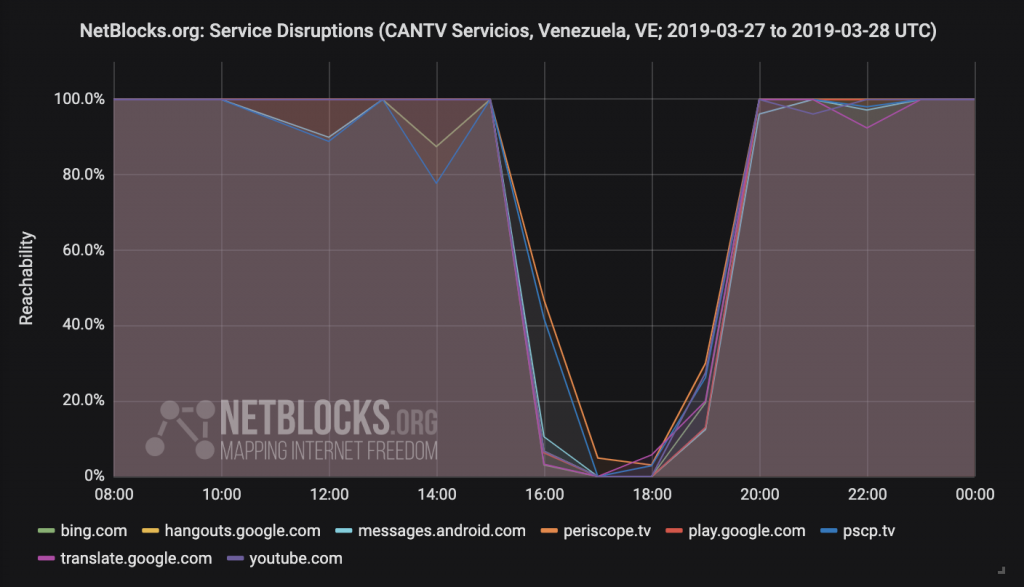