YouTube has been restricted by Venezuela’s state-run internet provider CANTV (AS8048) for over twenty hours, according to current network measurements from the NetBlocks internet observatory. Incident timings indicate a start time coinciding with live broadcasts from the country’s National Assembly on Wednesday.

The new outage, starting 14:00 PM UTC (10:00 AM VET) is the single longest-running disruption affecting YouTube during the current crisis.

Past platform disruptions affecting multiple Google services including the YouTube streaming platform as well as Microsoft Bing have been detected by the NetBlocks internet observatory on state provider CANTV (AS8048), starting 4:45 PM UTC (12:45 PM VET) Monday 18 February 2019, during the live streaming of a speech. 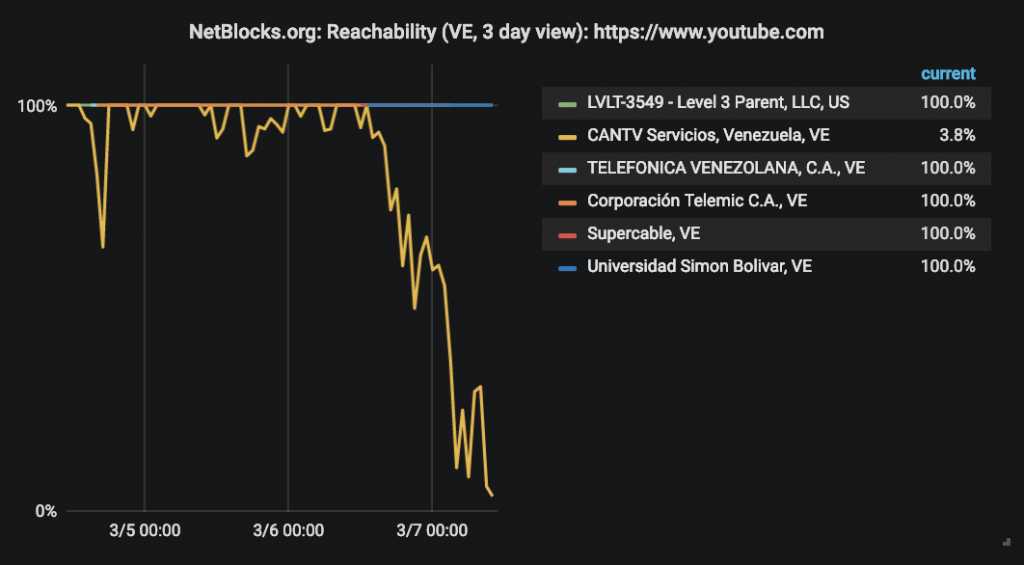 Each set of network measurements has corroborated widespread user reports during the specified period. The leader’s speeches and public appearances have been systematically censored through recent weeks amid political crisis and loss of confidence in contested president Nicolás Maduro. Network measurements show that the outages are consistent with methods used to block online content in Venezuela. Access has typically been restored shortly after the speeches end, with previous incidents lasting from just 12 minutes to over an hour.