Data from the NetBlocks internet observatory confirm that Venezuela’s state-run internet provider ABA CANTV (AS8048) has restricted access to Twitter, Facebook and Instagram social media services through the morning of Saturday 16 November,  subsequently also extending to YouTube. The targeted filtering comes on the morning of planned political protests and a new mobilization for free and fair elections in the country.

Technical measurements corroborate reports from across Venezuela from users who report having to use to VPN tools to gain access to the affected services.

Update: Streaming service YouTube, Google services and Bing have also been restricted as of 1:00 p.m. local time, as Juan Guaidó takes the podium to make a live-streamed speech from Caracas discussing the recent transition in Bolivia and his plans for change in Venezuela. The disruption marks the return of ephemeral streaming services that had been observed frequently in early 2019:

Why are social media restricted?

Although Venezuela doesn’t issue public blocking orders, the restrictions are believed to target protests planned for Saturday by Juan Guaidó. Hours earlier, reports emerged that the offices of Juan Guaidó had been stormed by armed men and tensions remain high.

Venezuela systematically censored the leader’s speeches through the first half of 2019. The new disruption marks the return of social media blocking measures at scale.

Authorities simultaneously announced that certain lines and stations of the Caracas metro system serving the protest would close their doors:

What is the mechanism of the social media blocks?

NetBlocks tests show that SNI blocking is in use, impacting TLS secure connections to the affected platforms. The SNI restrictions are intermittent, with moments when access is briefly available through the morning. 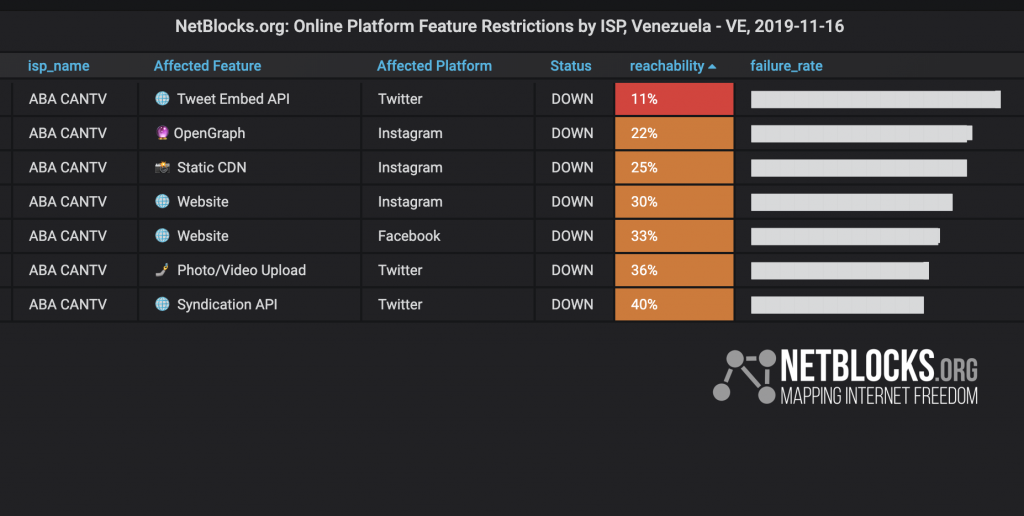