The NetBlocks internet observatory has identified total internet outages across Venezuela, affecting much of the southwest and east of the country. The outages, which began at 5:30PM UTC 26 January 2019 have lasted 28 hours, with access only now returning for most users.

NetBlocks diffscans, which map the entire IP address space of a country in real time, show the progression of the blackouts across different regions of Venezuela:

The measurements corroborate reports emerging of internet users’ difficulty contacting friends and family in the country, as well as direct reports from citizens whose connections have been momentarily restored.

The total outages follow a a series of partial restrictions and service outages affecting Wikipedia, social media and popular online platforms in recent days. The disruptions mark an intensification of internet disruptions during a period of political turmoil over the disputed presidency. 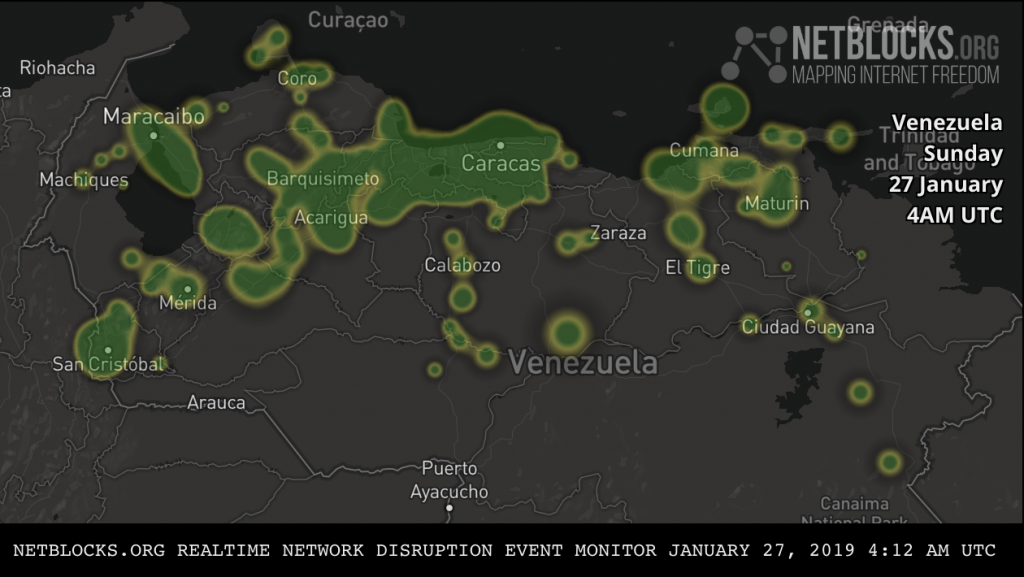 Platform disruptions affecting Periscope, YouTube, Instagram and Facebook have been detected on state provider CANTV (AS8048) during a politically significant live-streamed speech by Juan Guaidó, 27 January 9:02PM local time, with interruptions lasting 12 minutes. The disruptions, which did not affect other providers or platforms tested during the same period, are likely to have impacted audience reach and viewership figures: