The table shows service outages, including the temporarily restricted platforms as well as permanently restricted independent media websites, as observed from 500 accessibility and latency network tests taken from 30 vantage points across Venezuela.

Not long after connectivity was restored, a second disruption was implemented at 6:55 p.m. UTC (2:55 p.m. VET) as a meeting of oil industry workers and PDVSA union members with Guaido was live-streamed:

CANTV subscribers had a two-minute opportunity to update their YouTube feeds, as restrictions were briefly lifted between as the oil workers’ meeting ended before a Lima Group press conference, also targeted by state censors, started in Peru:

Update: Citizens of #Venezuela had a two-minute opportunity to update their YouTube feeds, while restrictions were briefly lifted between end of #PDVSA meeting and start of #Lima Group press conference in #Peru 🤦‍♀️ #3May #KeepItOn https://t.co/uX92ISG94t pic.twitter.com/QDOvz7kJFE

Access to the services was finally restored after the conclusion of the Lima Group press conference at 9:12 p.m UTC (5:12 p.m. VET).

On 30 April, multiple services were restricted for much of the day after Juan Guaidó garnered a degree of military backing and called the public out onto to the streets for “Operation Freedom”, a project with the stated goal of reinstating democratic establishments in Venezuela.

Yesterday, on the afternoon of Thursday 2 May, NetBlocks data from 20 vantage points across Venezuela confirmed Google services (and briefly, Twitter and Instagram) were restricted while Guaido’s political ally Leopoldo Lopez spoke from the Spanish embassy in Caracas, as also noted by local observers: 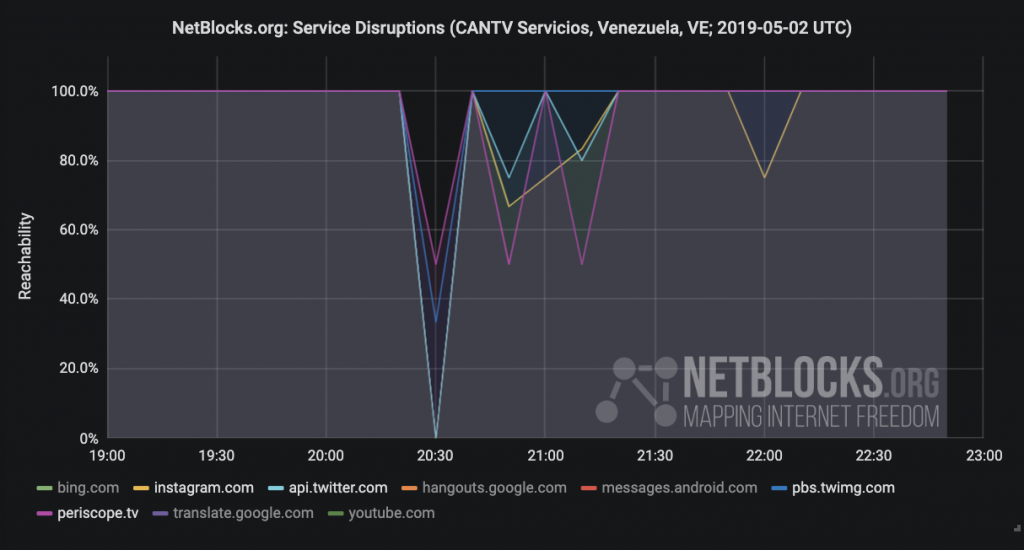 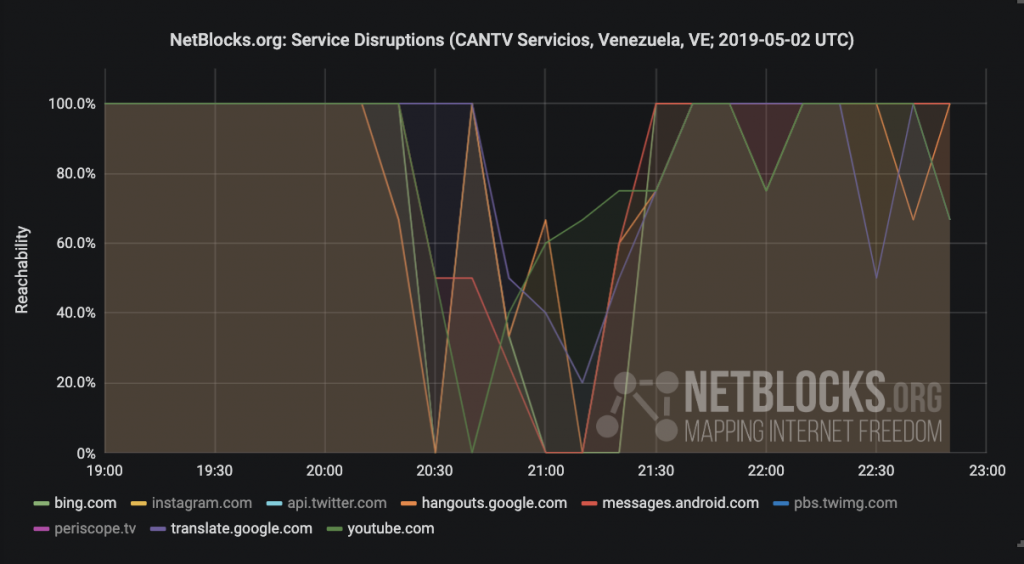 The new disruptions show the continuation of ephemeral, or intermittent internet censorship imposed by the state appearing to target critical speech. Data are consistent with previous targeted disruptions during public appearances by Juan Guaidó, and during sessions of Venezuela’s National Assembly. Connectivity returns when adversary Nicolás Maduro and his officials address the population.