The disruption lasted three hours and followed public outcry and international condemnation of the politician’s detection.

As reports of the ambush emerged, Venezuela’s National Assembly alerted the public to the crisis through social media platforms and supporters began a vigil.

Streaming services were previously restricted while Juan Guaidó made a statement on the situation of Zambrano on 3 May 2019. The politician is among a group accused of conspiracy, rebellion and treason by Venezuela’s Supreme Court, following an attempted uprising on 30 April.

The NetBlocks web probe chart shows overall reachability of the affected platforms across Venezuela, based on network performance measurement data collected from 20 vantage points across the country. 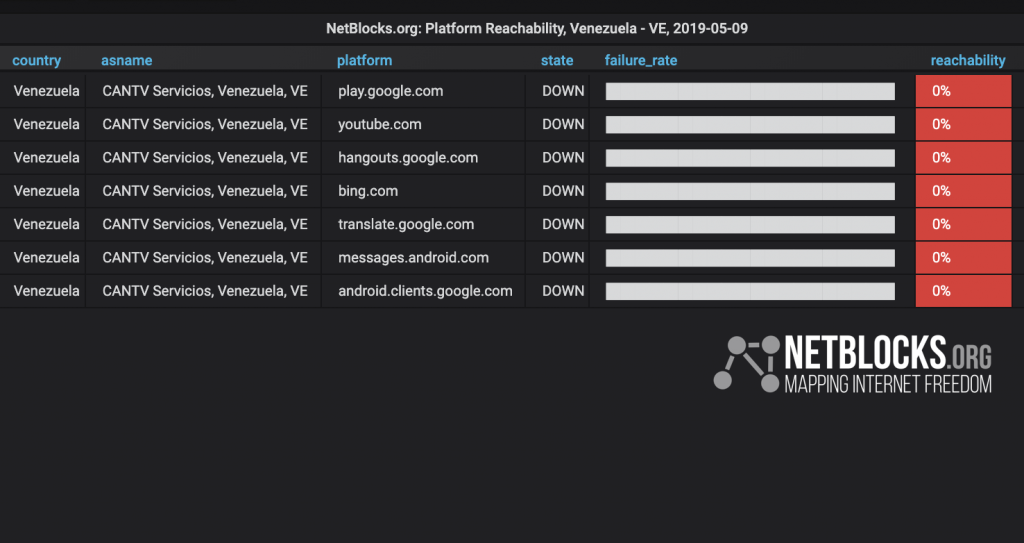 Internet censorship in Venezuela has become increasingly pronounced in recent days, with a series of major disruptions during and after the uprising of April 30 2019.

The new disruptions show the continuation of ephemeral, or intermittent internet censorship imposed by the state appearing to target critical speech. Data are consistent with previous targeted disruptions during public appearances by Juan Guaidó, and during sessions of Venezuela’s National Assembly. Connectivity returns when adversary Nicolás Maduro and his officials address the population.