The new disruption impacts Sudan Telecom’s Sudani service, following the loss of Canar Telecom and Mobiltel Zain. Mobile internet connectivity was already largely offline across Sudan since 3 June after attacks on pro-democracy sit-ins in Khartoum, and the new disruptions represent a near-total blackout of connectivity for the majority of citizens.

The new outages come as death toll figures rise, with validated reports of over a hundred killed since the beginning of the month, amid arbitrary violence and predatory attacks targeting pro-democracy demonstrators attending sit-ins to demand a civilian-led government.

NetBlocks has classed the outages as a near-total restriction on the flow of information in and out of Sudan.

Internet measurements confirm the restrictions are now more severe than those implemented during the rule of ousted president Omar al-Bashir. 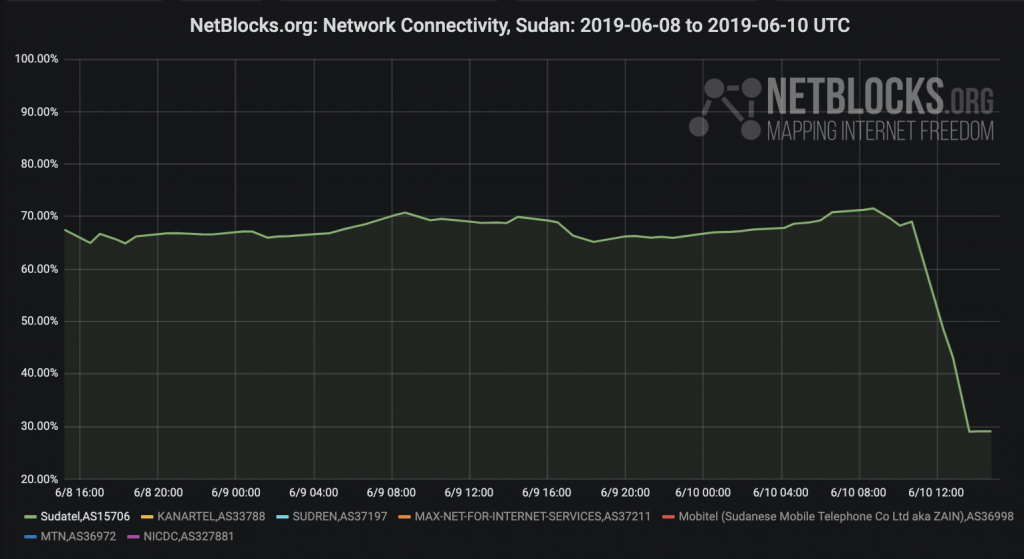 On Wednesday 5 June, connectivity with fixed line provider Canar (Kanartel, AS33788) dropped to 40%, knocking out most subscriber connections:

Through December to April, Sudanese ISPs disrupted social media, censored media and frequently disabled nationwide connectivity as protesters took to the streets to drive president Omar al-Bashir out of power.

Access to Twitter, Periscope, Facebook, Instagram, and WhatsApp were restored in Sudan on Thursday 11 April 2019 as the leader stepped down following months of intense demonstrations, as show in network measurement data collected by the NetBlocks internet observatory.

During the longest disruption, Sudan cut social media for 68 consecutive days, with Facebook, Twitter, Instagram and WhatsApp outages beginning 10 AM 21 December 2018 and lasting until February 26 2019, according to NetBlocks internet measurements.

The Internet Society calls on the transitional government of Sudan 🇸🇩 to restore full access to the Internet, and to #KeepItOn https://t.co/WoauNqELDc pic.twitter.com/8wxKWBK46k

Civil society and technical groups including the Internet Society have called for the restoration of connectivity in Sudan. The availability of unfiltered internet access and an end to political censorship remain essential for a successful transition to a civilian-led government.