The unblocking comes amid reports that embattled President al-Bashir will step down following months of widespread demonstrations calling for his resignation.

Confirmed: Social media has been restored across #Sudan as protesters appear to prevail after months of protest against President Omar al-Bashir's rule #SudanProtests #KeepItOn ⬇️https://t.co/GozRVJD5qU pic.twitter.com/a73rvLjafk

Twitter, Periscope, Facebook and Instagram as well as the web platforms for the WhatsApp and Telegram messaging apps were blocked on Sunday after protesters converged in Khartoum calling for a peaceful transition of power.

Canar Telecom (Kanartel), Zain-SDN, and Sudatel have restored access to the services, while the situation remains intermittent with MTN.

Online platforms have been used extensively by protesters, journalists and ordinary citizens, who have continued to get online using VPN circumvention tools despite the restrictions. Earlier in the week, a video of protester Alaa Salah went viral, becoming an iconic symbol for the movement and simultaneously highlighting the futility of Sudan’s internet censorship regime.

The new findings are based on over 4000 network performance measurements taken through Thursday morning. The legal framework for the restrictions remains unclear.

The app and website blocks, introduced from morning to midday Sunday 7 April 2019 were followed by a brief national power outages disabling some 45% of telecommunications across Sudan later in the day, as the government appeared to resort to increasingly severe tactics to suppress dissent. 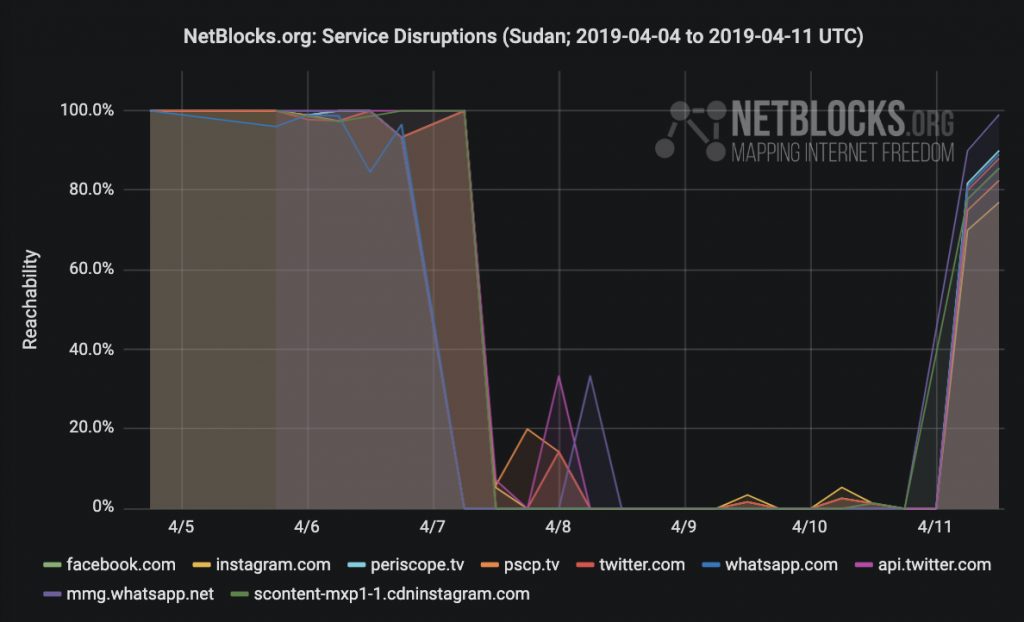 The list of blocked apps and social media platforms matches the list from previous censorship incidents in Sudan (see chart from 21 December 2018, below, and newswires) with new additions: the website and web gateway for Telegram, a mobile messaging app popular with activists in Sudan and globally have also been restricted.

The restoration and continued availability of Sudan’s social media and an end to politically motivated censorship are considered requisite for a peaceful transition to a civilian-led government.