Network data from the NetBlocks internet observatory confirm that YouTube and several Google services and websites have been blocked across Algeria on the evening of Thursday 8 August 2019 by state-run Algeria Telecom (AS36947) and other leading internet providers.

The restrictions come after the publication of a video where Algeria’s ex-defense minister Khaled Nezzar addressed “members of the National People’s Army” calling on them to “realize the demands of the people,” understood as to be a call for the public to oust military leader Ahmed Gaid Salah.

Update: The multi-hour nationwide restriction has been lifted as of 23:00 UTC. It remains unclear who ordered the block and whether further disruptions are due to be implemented.

Technical data show that YouTube as well as Android mobile platform backends, Google Translate, Google Hangouts and Play Store are unreachable in Algeria. The outage is consistent with methods used to restrict online content in the country.

Users report that they are resorting to VPN tools to circumvent the national censorship measure, for which no legal basis or court order had been established at the time of writing. 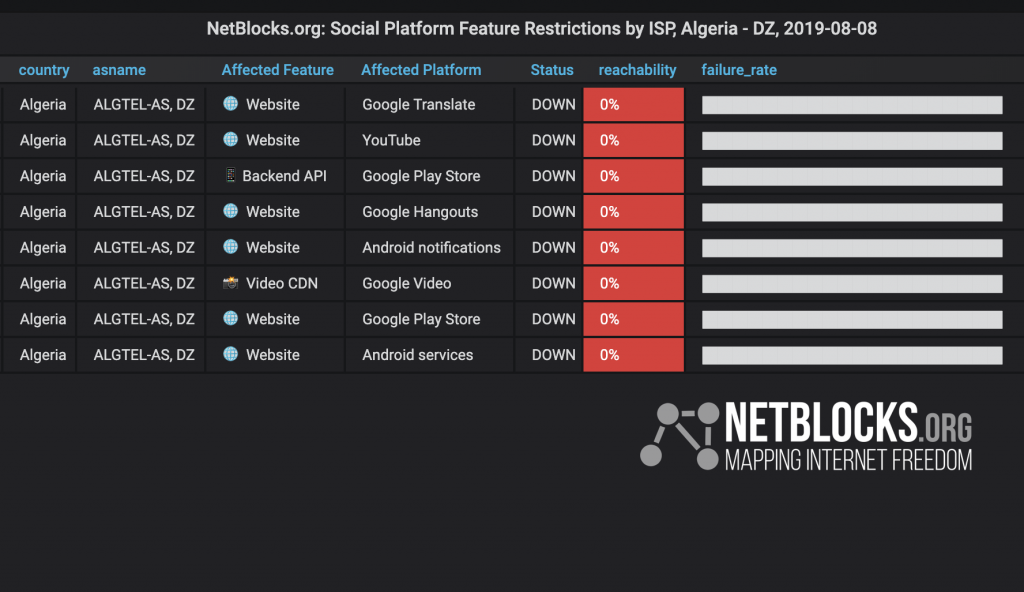 NetBlocks has previously tracked internet disruptions in Algeria during protests against Abdelaziz Bouteflika, and during school examinations earlier this summer as an apparent measure to prevent cheating.