Ethiopia’s internet has been totally cut off as of 7:30 a.m. UTC Tuesday 11 June 2019. The disruption follows the partial restriction of messaging apps beginning Monday and is believed to be a measure to counter cheating during national secondary school final exams.

Data show that connectivity with the country’s only internet provider, state-run Ethiopia Telecom (AS24757) has been disconnected at the recorded time. No public statement was available at the time of writing.

Update: Connectivity was restored as of 12:30 p.m. UTC, but cut again hours later. A second shutdown which started in the evening has ended on 12 June at 6:30 a.m. UTC, however service is degraded to the point of being unusable.

Update: On Thursday 13 June 2019, Ethiopia is offline for a third day with internet access cut again in an attempt to prevent cheating during secondary school final exams — this time some 10% of connectivity has been left working:

Update: #Ethiopia is offline for a third day, with internet access cut again in an attempt prevent cheating during secondary school final exams — this time some 10% of connectivity has been left working; incident ongoing #KeepItOn 📉https://t.co/AZASjIdHLe pic.twitter.com/Dvh34glCaq

Update: On Friday 14 June 2019, Ethiopia is offline for a fourth day with internet access remaining cut again — this time some 12% of connectivity has been left working. The incident is ongoing:

Update: #Ethiopia remains offline for a fourth day, the current disruption in its third consecutive day, in an apparent bid to stop cheating during secondary school final exams — some 12% of connectivity has been left working; incident ongoing #KeepItOn 📉https://t.co/AZASjIdHLe pic.twitter.com/j7RwRhfNgo

Update: Monday 17 June, 11:00 a.m. UTC: Access to WhatsApp is being restored following the disruption messaging apps that began 10 June 2019, according to network data. Servers for Telegram, one of the most popular messaging apps in Ethiopia, remain blocked preventing web access and registration. However the Telegram mobile app is known to incorporate a degree of censorship resistance:

Update: #Ethiopia blocked access to WhatsApp and Telegram on 10 June, a day before the total internet shutdown. WhatsApp was restored on the 17th but network data show Telegram never came back 🤷‍♀️📈https://t.co/AZASjIdHLe pic.twitter.com/GQZ89loj2y

Update: Nationwide internet connectivity in Ethiopia appeared to return to ordinary levels by Tuesday 18 June 2019. However, Telegram remains restricted as of Friday 21 with no explanation as to why messaging apps were blocked: 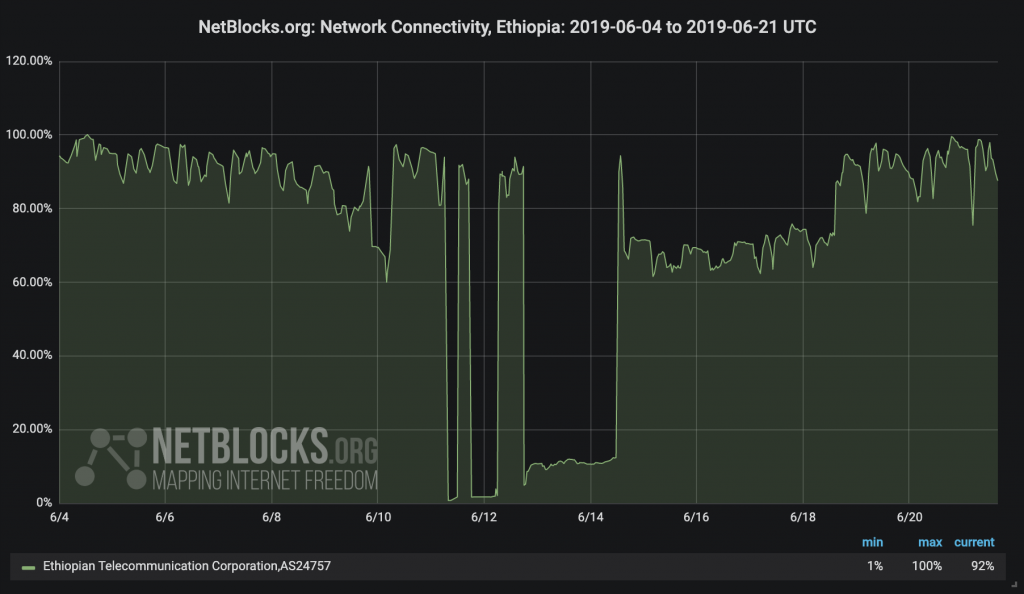 Next: Internet shutdown in Ethiopia amid reports of attempted coup