Ethiopia’s internet has been largely disconnected starting 8:15 p.m. UTC Saturday 22 June 2019 and having nationwide impact as of 9:00 p.m. UTC, as reports emerge of an attempt to unseat the regional government in Bahir Dar, Amhara state, north of capital Addis Ababa.

Real-time network data show that national IP connectivity dropped to 2% of normal levels as the Prime Minister’s secretariat appeared live on Ethiopian Television to explain, “armed men tried to unseat the Amhara Regional State Government by force but their attempt has been foiled.”

Gunfire was subsequently been reported in Addis Ababa and security operations are understood to be ongoing. The internet disruption constitutes a significant restriction on the flow of information in and out of Ethiopia, making it difficult to assess the current situation on the ground.

Data indicate that the outages have progressed to nationwide impact, after regions in the north, including Amhara State and eastern regions first went offline as word of the coup spread ultimately leaving 98% of Ethiopia offline, a situation that is ongoing at time of writing.

It remains unclear which party has ordered the internet shutdown at the present time. Timings from the NetBlocks observatory suggest the nationwide disconnection was imposed after the plot was uncovered. Hence, it is not evident whether the internet shutdown is being implemented by those who organised the uprising, or by government forces who are seeking to suppress it: 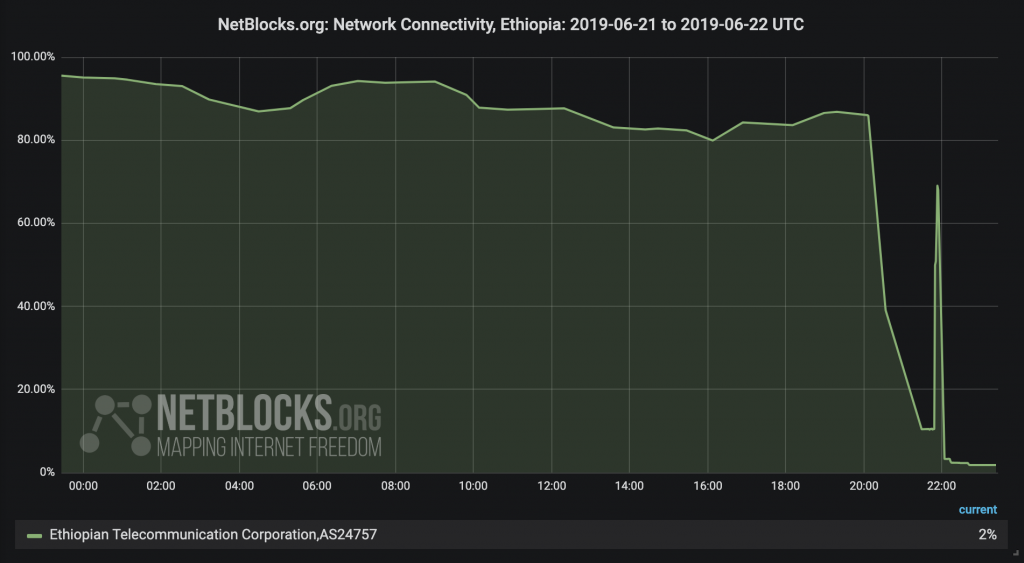