Internet access is in the process of being restored in Ethiopia as of 6:00 a.m. UTC Thursday 27 June according to network measurement data. Overall connectivity is rising toward levels observed prior to the total disruption with wifi hotspots coming online, although mobile data remains unavailable.

Ethiopia had been almost totally cut off from the internet for over 100 hours following a shutdown which started Saturday evening amid reports of an attempted plot to unseat the Amhara Regional State Government.

Update: Social media, VPN services and messaging apps are being blocked as of noon. Facebook, Instagram, Messenger and WhatsApp web and CDN and some VPN sites now restricted, with Telegram and YouTube also intermittently down:

Shortly after the attack on Saturday, the Prime Minister’s secretariat appeared live on Ethiopian Television to explain, “armed men tried to unseat the Amhara Regional State Government by force but their attempt has been foiled.” It later emerged that prominent government figures had been shot dead.

Instances of gunfire were also reported by the U.S. Embassy and other sources in Addis Ababa. Concerns grew over the possibility of wider conflict as a day of national mourning was declared, although the alleged attackers were reported killed by Monday afternoon with the situation appearing to stabilize.

Access levels are approaching, but still below, ordinary levels recorded prior to the onset of the total shutdown on Saturday with mobile data networks still offline. NetBlocks web probe tests confirm that social media and messaging apps are not blocked. On 10 June, Ethiopia’s two most popular communications apps Telegram and WhatsApp were blocked without explanation but later unblocked and currently remain available to those with internet access.

Internet users living abroad rejoiced hearing from friends and relatives for the first time in days:

So good to finally get WhatsApp messages from my family and friends in Ethiopia 😭 No internet in 2019 cannot be the way forward. Welcome back though, apparently only WiFi is turned on but we'll take that!!!

Others mused about the unknowns:

Internet is back, let the conspiracy theory begin#Ethiopia

What regions of Ethiopia were offline?

Network connectivity levels generally correlate to internet availability in a given country. Between 2% and 9% of Ethiopia’s networks remained reachable during the shutdown, with those connections serving critical infrastructure and appearing to provide access for technical staff and government officials.

Some of the same internet addresses were also kept online during the earlier series of disruptions in June, which had reportedly been implemented as a measure to prevent cheating in national exams.

How did the shutdown progress?

Data indicate that the outage rapidly progressed to have nationwide impact, following a brief partial disruption affecting parts of the north, including Amhara State, and some eastern regions. By the time word of a coup attempt had spread, some 98% of Ethiopia was already offline.

Who is responsible for Ethiopia’s internet outage?

It remains unclear which party ordered the internet shutdown in the first place, and also unclear why Ethiopia remained offline for five days. More details are likely to emerge now that residents are able to communicate with the outside world. 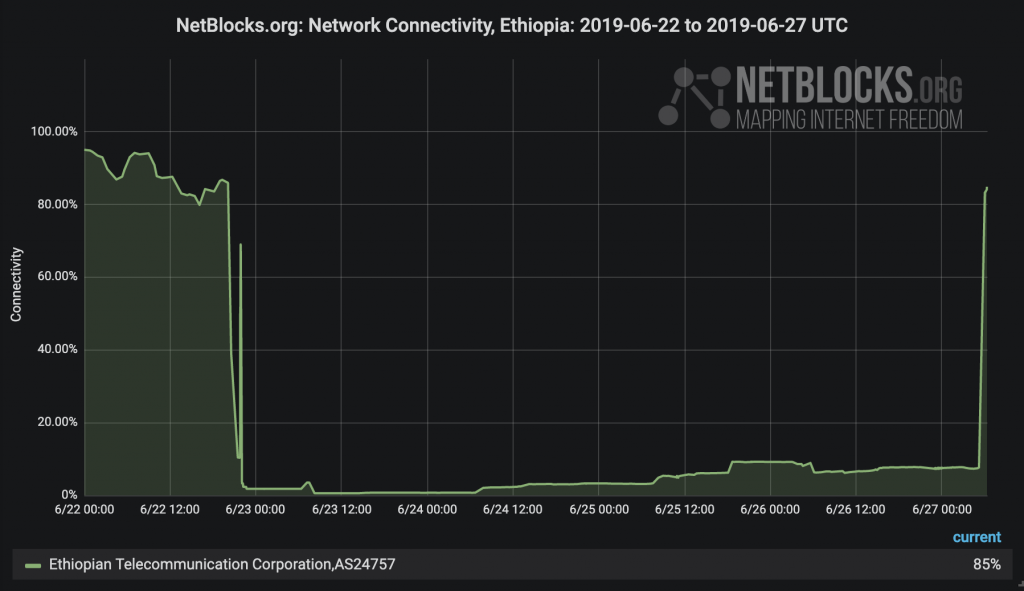