Ethiopia has been cut off from the internet for over 48 hours following a blackout which started Saturday evening amid reports of an attempted plot to unseat Amhara Regional State Government.

Update: The disconnection continues at 100 hours; see below.

Real-time network data from the NetBlocks internet observatory show that over 97% of Ethiopia remain disconnected as of 8:30 p.m. UTC Monday evening.

The disruption has made it difficult for journalists and observers to assess the situation on the ground. Through Monday, news media appeared to rely on official press statements with limited access to independent sources.

Instances of gunfire reported by the U.S. Embassy and other sources in Addis Ababa raised concerns over the possibility of wider conflict although the alleged attackers were reported killed by Monday afternoon as a day of national mourning was declared. 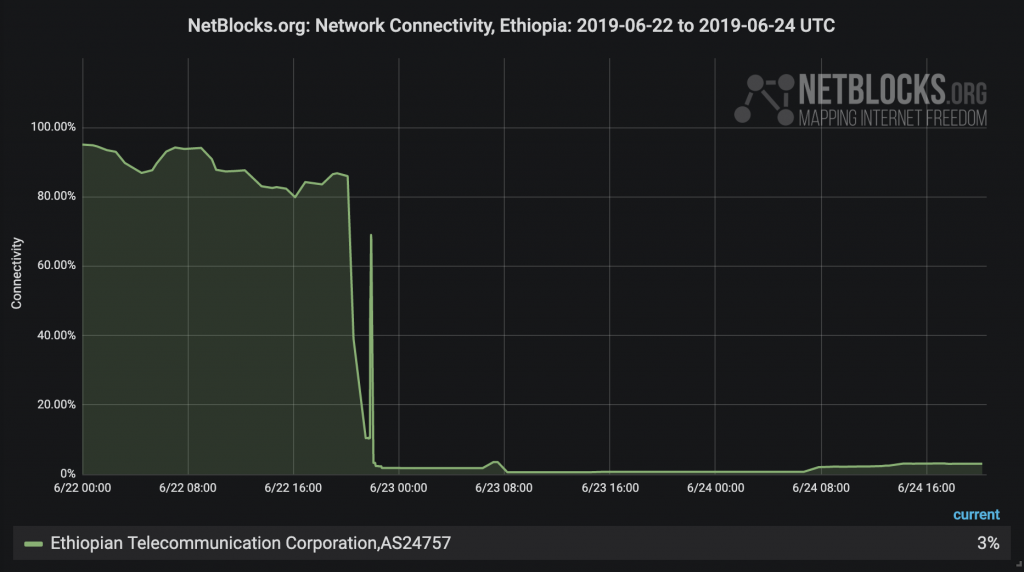 Shortly after the attack on Saturday, the Prime Minister’s secretariat appeared live on Ethiopian Television to explain, “armed men tried to unseat the Amhara Regional State Government by force but their attempt has been foiled.” It later emerged that prominent government figures had been shot dead.

What regions of Ethiopia are offline?

Network connectivity levels generally correlate to internet availability in a given country. Current real-time diffscan data, which map the IP space of a country, show that between 2% and 3% of Ethiopia’s networks remain reachable. Hence, the outage affects the entire country save for a few addresses.

NetBlocks researchers have attempted to geolocate some of the few remaining connections, finding that they may belong to technical staff or officials in the capital, as well as touristic locations such as the historic city of Axum north of Amhara state.

Some of the same internet addresses were also brought back online during last week’s series of disruptions, reportedly introduced as a measure to prevent cheating in national exams.

However, it is unclear whether the small pockets of connectivity translate to actual connectivity for ordinary internet users and the outage remains classed as a total internet shutdown.

How did the shutdown progress?

Data indicate that the outage rapidly progressed to have nationwide impact, following a brief partial disruption affecting parts of the north, including Amhara State, and some eastern regions. By the time word of the coup attempt began to spread, some 98% of Ethiopia  was already offline.

Who is responsible for Ethiopia’s internet outage?

It remains unclear which party ordered the internet shutdown in the first place, and also unclear why Ethiopia remains offline. Timings from the NetBlocks observatory suggest that the nationwide disconnection may have been imposed after the plot was uncovered in support of counter-operations to put down the insurgency.