The NetBlocks internet observatory has identified several regional internet disruptions across Algeria, as of Friday 22 February 2019, as the public have gone out to the streets to participate in protests.

Data indicate that multiple networks have been intermittently offline from 8:00PM UTC Thursday, affecting several regions in and around Algiers. Specific regional disruptions have been identified in Bordj Menaiel, Tizi Ouzou, and east of Chlef.

The internet disruptions come as an alliance of opposition political groups have been calling for the demonstrations to be held after prayers on Friday, following the withdrawal of several opposition parties from the presidential elections scheduled for April 18 2019.

NetBlocks diffscans, which map the entire IP address space of a country, provide evidence of the scope and timing of the ongoing disruptions. Concerns have been raised over their impact on press freedom, freedom of expression and freedom of association and assembly.

Update: Disruptions have continued through the weekend in several regions which have held further protests:

Since Friday #Algeria's internet has also been disrupted at opposition flashpoints outside #Algiers; pictured: temporospatial mapping of IP connectivity in #Laghouat during this weekend protests; follow us for live updates #KeepItOn ⬇️https://t.co/qZdFr2621P pic.twitter.com/tOSZDAUyIU 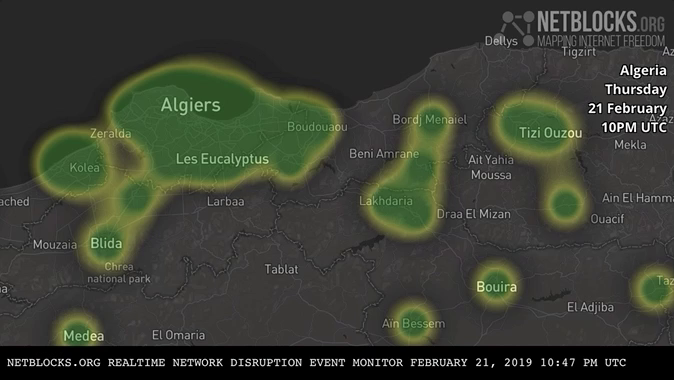