NetBlocks data show that leading internet providers Sri Lanka Telecom, Dialog Axiata, Mobitel, Etisalat and Airtel have implemented the restrictions, which is ongoing as of the latest update at 1:10 a.m UTC (6:40 a.m. local time) Tuesday 14 May. The disruption is the third nationwide censorship order deployed by Sri Lanka in the span of one month. Snapchat and Twitter remain available on certain providers, as detailed below.

Similar blocks were recently implemented on April 21 following a series of deadly terror attacks, and again on May 5 amid tensions in Negombo. The complete set of blocked communication platforms varies by provider, as indicated by the reachability chart.

One of the providers, Dialog Axiata, issued a public announcement via its Twitter account notifying users of the censorship measure, hours before moving to block Twitter itself:

As per the directive issued by the Telecommunications Regulatory Commission of Sri Lanka (TRCSL) Facebook, WhatsApp,Viber, IMO, Snapchat, Instagram & YouTube would be restricted with immediate effect until further notice.

The initial findings were drawn from a set of 5,000 NetBlocks internet performance measurements collected from 30 vantage points across Sri Lanka in addition to a larger global control data set, providing an accurate and representative view of network performance and service reachability via multiple internet service providers. 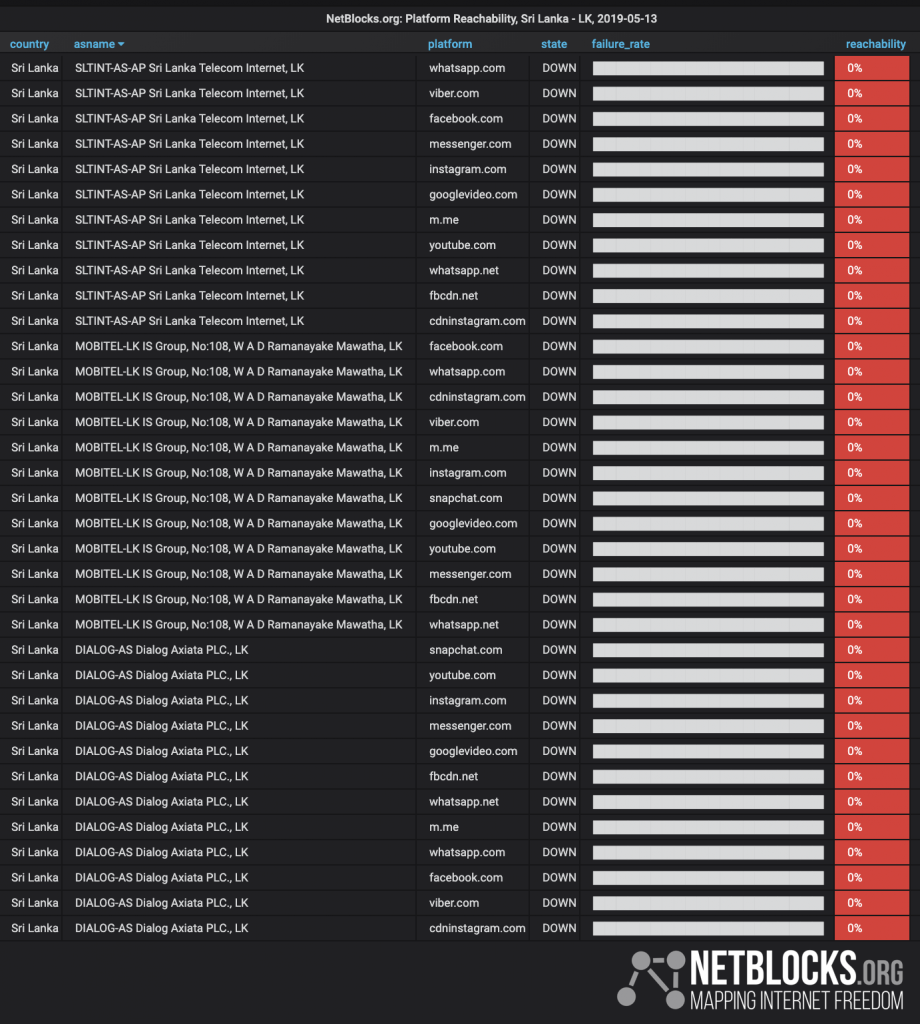 During the previous disruptions in April and early May concerns were raised over the impact to citizens’s ability to communicate and impart information in the midst of crisis. Sri Lankan internet users reported difficulty checking on friends and family in the days following the attacks and the blanket ban sparked a global debate about online censorship and the role of social media in society.

Sri Lanka also previously blocked social media in March 2018, for over a week after violence broke out in March 2018. In that instance, research conducted with the Sri Lanka Internet Society chapter highlighted the unanticipated social, technical and economic impacts of protracted digital blockades.