Internet providers in Sri Lanka are in the vanguard of blocking access to digital security tools that allow users to work around censorship, according to new NetBlocks network measurement data.

On Sunday, Sri Lanka restricted access to social media platforms following a series of deadly attacks on churches and hotels. The new VPN restrictions appear to target users who have been circumventing censorship measures, which the government says are in place to prevent the spread of disinformation. Critics caution that the filtering measures are an impediment to independent media coverage and free expression as Sri Lanka comes to terms with the attacks.

Report: Social media and messaging apps are still blocked in #SriLanka 75 hours after restrictions were introduced. Now, data shows a new wave of VPN blocks limiting media coverage and free expression in the wake of the attacks #SriLankaBombings #KeepItOnhttps://t.co/7Kft3PfBXI pic.twitter.com/Ss72m6zbuf

Sri Lanka joins a handful of states that implement similar controls on VPN services and internet protocols that tunnel network traffic from point to point:

Virtual private networks enhance privacy and also allow users to work around internet restrictions. VPN usage is common in among journalists and in ICT, consulting and financial sectors, where they are often required for security reasons.

Data shows that one of the most prominent commercial VPN providers was blocked at 4 AM UTC Monday morning, 9:30 AM local time one day after the attacks and initial response: 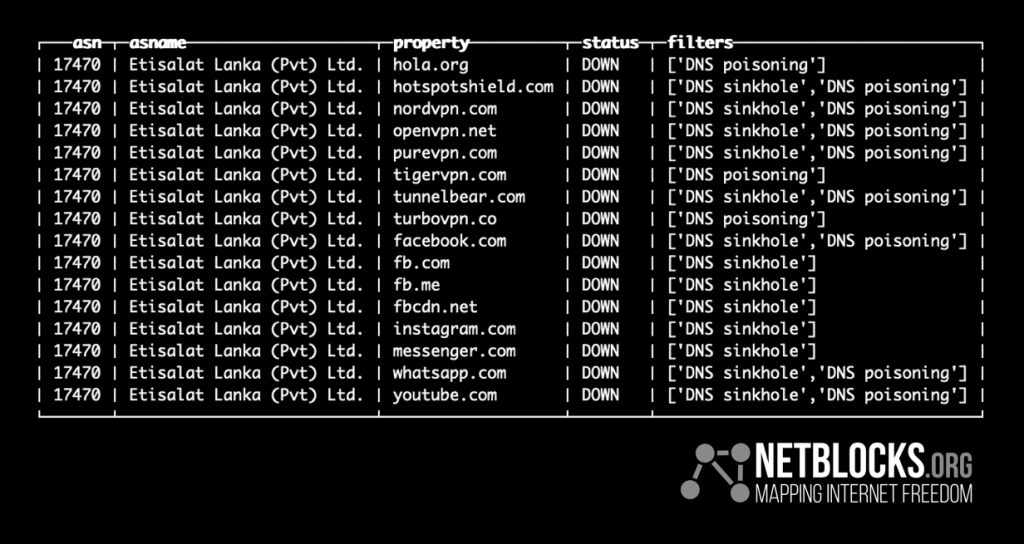 Technical evidence corroborates user reports of difficulty downloading, installing and connecting to various VPN services, widely used by Sri Lankans as a means to access blocked social media sites and messaging apps following Sunday’s attacks, further indicating that they have been implemented on a separate schedule to the social blocks. The restrictions come amid criticism of the government’s handling as citizens come to terms with the situation.

Sri Lanka previously blocked social media in March 2018 for a period of eight days, restricting access to a similar set of digital platforms and incurring an estimated $30m cost to the country’s GDP.