Network data from the NetBlocks internet observatory confirm the loss of internet access across parts of Kashmir, amid a growing military presence and curfew reportedly imposed by Indian forces.

The telecommunication blackouts are understood to be related to the imposition of Section 144 across Srinagar which limits public assembly.

Although short of a total information blackout, data show the fall of connectivity to 9% of nominal levels in Srinagar, as well as registering significant disruptions in surrounding regions. 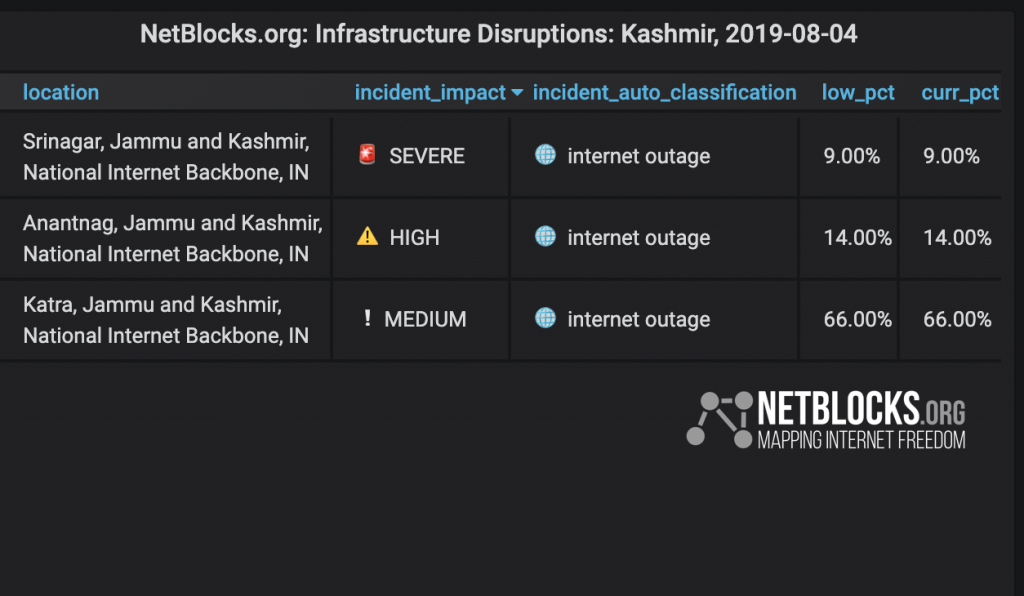 Shortly prior to the blackout, queues for fuel and supplies began to form as premonitions grew over the militarized presence. The disruption has raised concerns for the safety and wellbeing of residents as well as posing a threat to the fundamental human rights of free expression and free assembly.

The telecommunication blackout continues amid troop deployments and curfews as India announces plans to revoke Article 370, a constitutional provision that grants special status allowing Jammu and Kashmir to make its own laws:

Update: 14 October, 2019: Mobile traffic data from Kashmir indicate the partial return of cellular connectivity on day 71 of the ongoing internet shutdown, as some users report post-paid packages have started working. However, fixed-line internet, wifi and most mobile connections remain cut: