Network data from the NetBlocks internet observatory provide evidence of a new wave of internet shutdowns in India from the evening of Thursday 26 December. Outages have been identified with major mobile and fixed-line networks in several cities of Uttar Pradesh, one of various states affected by recent protests against India’s new citizenship laws. 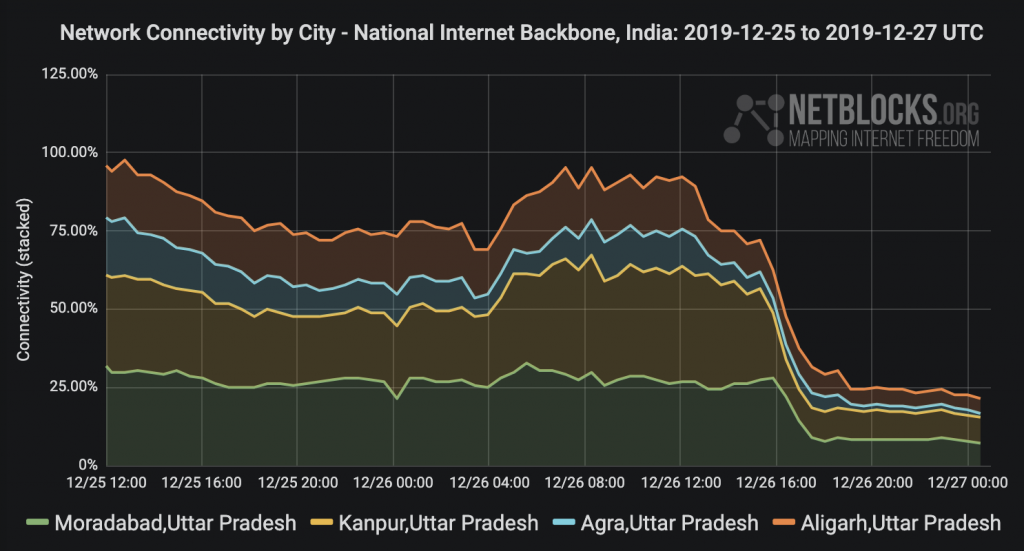 Why has India shut down internet access in parts of Uttar Pradesh?

Although India does not implement nationwide internet shutdowns, the country has become increasingly emboldened with its use of regional blackouts it orders to restrict protests or push through legislative bills seen as lacking popular support.

News sources quote Saharanpur police superintendent explaining, “To prevent spreading of rumours we have decided to close internet services till tomorrow and we have sent a letter regarding that to telecom service providers.” Kanpur, Agra, Meerut, Sambhal, Mathura, Saharanpur, Bijnor, Sitapur, Bulandshahr, Firozabad and Ghaziabad are among cities subject to disconnection.

Meanwhile, Internet access remains largely shut in Kashmir since the government revoked Article 370 in August terminating provisions for self-governance. Internet was cut for several days in Aligarh this November when courts issued a ruling to settle a 70-year ethnic land dispute in Ayodhya.

Earlier in December, NetBlocks reported on a major shutdown in Assam as protests against the Citizenship Amendment Bill first gained momentum, and regional disruptions have been reported since then up to the present.

The latests shutdowns are among a series of high-profile cases in recent months where Prime Minister Narendra Modi’s government and ruling Hindu nationalist Bharatiya Janata Party have sought to push through bills in the face of limited public support. Mass-scale telecommunications blackouts among the set of legal and technical mechanisms used to control protests that also effectively silence oppositional voices.

Hence, the disruptions in Uttar Pradesh can be seen as a continuation of the government’s response to protests, a policy that has become further entrenched since new citizenship laws was introduced earlier in December. India’s internet shutdowns continue to presents a clear threat to independent media coverage, restricting rights to freedom of expression and freedom of assembly.

How was the internet shutdown implemented?

Network data corroborate reports that the latest shutdowns are localized and affects specific cities or areas including those identified within Uttar Pradesh. Technical data show impact to both mobile (cellular) and fixed-line (wifi) service.

There is no indication of a kill-switch or advanced technical mechanism in use to disable telecommunications, and timings confirm that individual operators have each been forced to switch off access through a manual process after being legally compelled to do so, as in previous instances.