Network data from the NetBlocks internet observatory confirm Pakistan has shut down internet access multiple regions. Two distinct schedules of disruption appear to be in place.

In parts of Azad Kashmir, internet access has been cut as of 7th of September 2019 amid protests against India’s revocation of Article 370. Data show that PTCL networks were shut in Kashmir on multiple dates through August and the longest of these disruptions continues at the time of writing.

Thousands of people from different districts of Azad Kashmir are marching towards Tetrinot, LoC today. This video has just been uploaded from Rawalakot city. People are charged. Violence may erupt if govt tries to stop them. Local and int'l media needs to cover it. pic.twitter.com/c8GBzGTwmz

Similar disruptions were identified on 15 August 2019, Indian Independence Day, between 7:00 a.m. and 8:00 p.m. local time when the protests gained momentum:

Data show that #Pakistan's PTCL internet service was also disrupted in #AzadKashmir on 15 August 2019 between 7:00 a.m. and 8:00 p.m. local time as protests against India's abrogation of #Article370 gathered pace⏱

The measures come only weeks after India drew criticism from the international community and the United Nations after switching off internet and telephony services as it imposed a military curfew and terminated autonomy in the state of Jammu and Kashmir:

In other regions of Pakistan, mobile internet shutdowns have been reported from 8 September 2019 as a purported security measure for the religious festival of Ashura.

Each year, Pakistan restricts mobile access along the paths of processions. The practice has been called out by local communities who increasingly rely on the internet and social media platforms for their livelihoods.

One of several affected cities, Lahore was subject to mobile restrictions beginning 7 September and becoming more severe on the 10th: 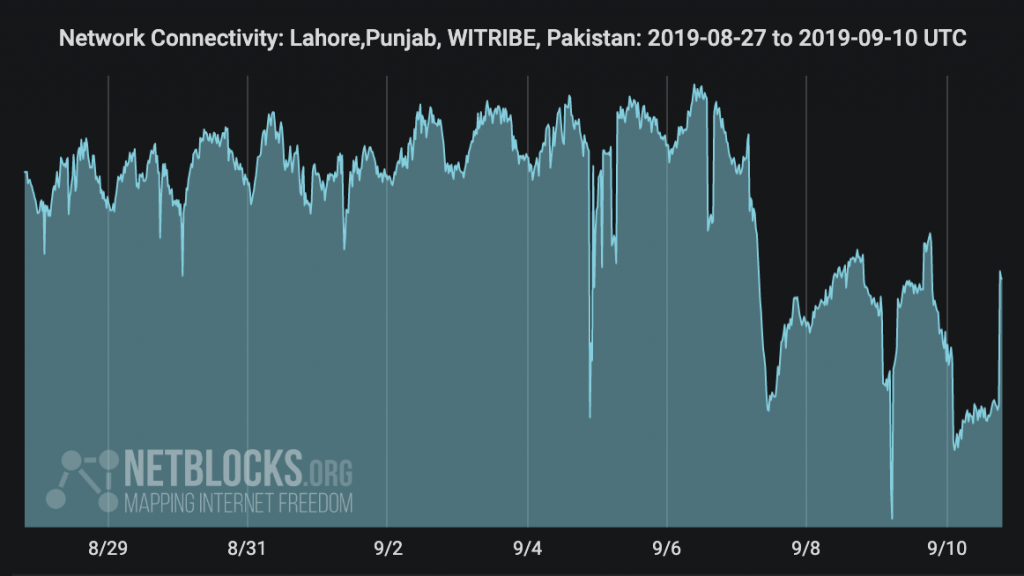 The combined measures present a significant challenge to the rights of Kashmir and Pakistan residents at a time when India’s shutdown in Jammu and Kashmir are already in the spotlight.

The combined schedules of network disruptions present a significant barrier to freedom of assembly and freedom of expression at a time when citizens need to be involved in civic discourse.

Further, ongoing disruptions in India and Pakistan are likely to fuel the spread of misinformation by cutting off authentic sources of news, according to investigative reports.

Why are Kashmiris protesting?

On Saturday, 7 September, thousands of Kashmiris took to the streets to protest India’s abrogation after local groups designated a “black day.”

Protests in Pakistan’s northern periphery have swelled through recent weeks and continue as of 10 September with participants approaching the Line of Control:

Thousands of Kashmiris from Azad Kashmir side have gathered near the Line of Control (LoC) to protest the scrapping of #Article370 by the Indian govt pic.twitter.com/ZZ1RGqwdtq

Media coverage has been muted, partly due to blackouts limiting the flow of information in both Pakistan and India-controlled parts of Kashmir, as well as self-censorship, state media regulation and reprisals against journalists in both countries.

Why has Pakistan shut down the internet?

Protesters in Azad Kashmir criticise India but many also question Pakistan’s handling of the crisis. Some elements among the crowd have gone further, reports claim, challenging the military and demanding independence. All of this potentially complicates the territorial dispute.

The Pak­istan Telecommunication Authority (PTA) on Sunday confirmed mobile phone services would be suspended in areas through which Muharram processions pass.

However, no explanation has been forthcoming regarding the schedule of protest-related shutdowns in Kashmir taking place since August.

Which areas of Pakistan are offline?

Technical data indicate that two distinct schedules of internet shutdowns appear to be concurrently in effect:

Azad Kashmir: An ongoing network shutdown is in effect starting on Saturday, 7 September and resuming Sunday, presenting a near-total disruption of communications for many users.

Punjab and other regions: Mobile restrictions are implemented limiting access to information and communications. Cities including Lahore, Rawalpindi, Faisalabad and Gojra show signs of disruption.

What is the impact on citizens?

Residents of Kashmir and reporters at the protests have expressed concerns about the loss of communications which have limited news coverage:

And what can you say about the (Punjab) police attack on JKLF protestors in Kotli, Azad Kashmir yesterday which injured 50 protestors? (Which then led complete media/internet blackout)

Can the honorable governor explain why force was used against them? https://t.co/8fv4nmPBEU

Azad Kashmir, s people are raising voices in favor of our bros and sisters against Indian brutally but Pakistan, s media is not providing coverage. here is also internet block-out. pic.twitter.com/cVurtBbnym 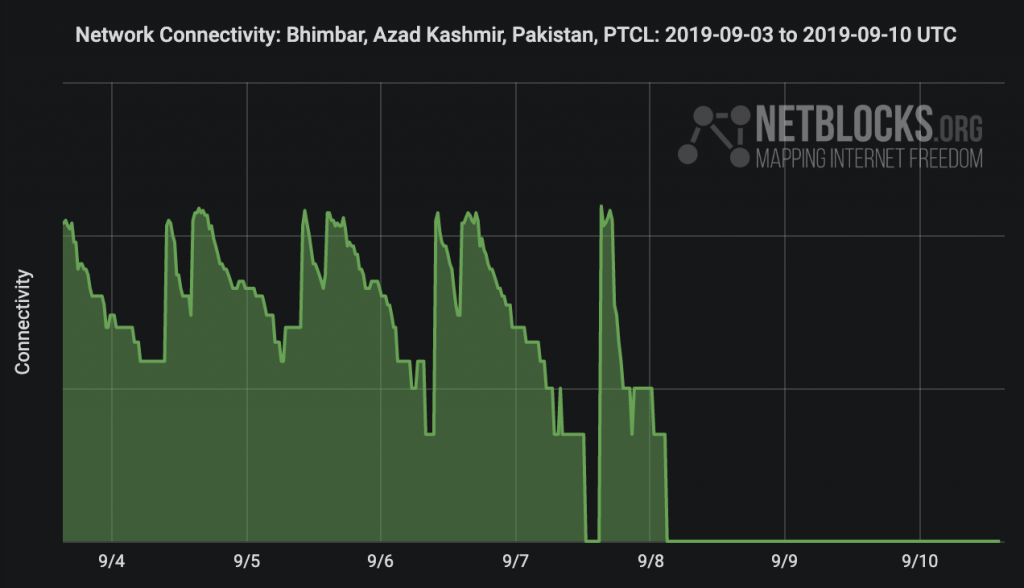