Facebook, WhatsApp, Instagram, YouTube, Viber, Snapchat and Facebook Messenger were blocked again in Sri Lanka, as of 5:00 p.m UTC Sunday 5 May 2019 (10:30 p.m local time), only days after service was restored following a previous blockade, according to network measurement data from the NetBlocks internet observatory.

The disruption has been lifted as of 3:15 a.m UTC (8:45 a.m. local time) Monday 6 May with access subsequently fully restored across affected providers.

Affected services were Facebook, Instagram and Snapchat social platforms, Google’s YouTube video streaming service, and messaging apps WhatsApp, Facebook Messenger and Viber. Network data show that the associated backend servers of each platform have also been blocked by some of the providers.

VPN services remained available to internet users and were not blocked at time of writing, in contrast with the previous disruption incident when VPN (Virtual Private Network) services were also eventually restricted, making it more difficult for users to circumvent the restrictions. Twitter, Telegram and platforms less popular in Sri Lanka remained fully available.

The new incident follows reports of clashes between groups in Negombo, site of one of the April 21 terror attacks. Sri Lanka has seen high tensions following the series of deadly blasts, after which social media were disconnected across the country.

NetBlocks data show that internet providers Sri Lanka Telecom, Dialog Axiata, Mobitel, Airtel, Etisalat, and Hutchison each implemented the restrictions, with filtering applied at the ISP level. There are minor variations in implementation of the ban, with Snapchat and some of the CDN backend servers used by mobile apps remaining available on some providers.

The services had only recently restored following the nine-day long nationwide disruption following a series of bombings targeting churches and hotels in Sri Lanka.

The new findings drawn from a set of 9,000 NetBlocks internet performance measurements collected with assistance from 50 volunteers across Sri Lanka, are consistent with and corroborate user reports complaining of difficulty accessing the online platforms, as well as another measurement appearing to indicate inaccessibility of one of Facebook’s websites.

Each NetBlocks web probe measurement consists of latency round trip, outage type and autonomous system identity, in addition to a larger global control data set, providing a real-time view of service availability and performance in a given country.

During last month’s disruption, concerns were raised over the impact to citizens’s ability to communicate and impart information in the midst of crisis. Sri Lankan internet users complained of difficulty checking on friends and family in the days following the attacks and the blanket ban sparked a global debate about online censorship and the role of social media in society.

Researchers found that messaging and social media blanket bans can actually cause an increase in disinformation and the spread of false news during crisis moments, as reported by @nytimes when #SriLanka blocked the same services in April #KeepItOnhttps://t.co/kvanUsLdU2

Sri Lanka also previously blocked social media in March 2018, for over a week after violence broke out in March 2018. In that instance, research conducted with the Sri Lanka Internet Society chapter highlighted the unanticipated social, technical and economic impacts of protracted digital blockades. 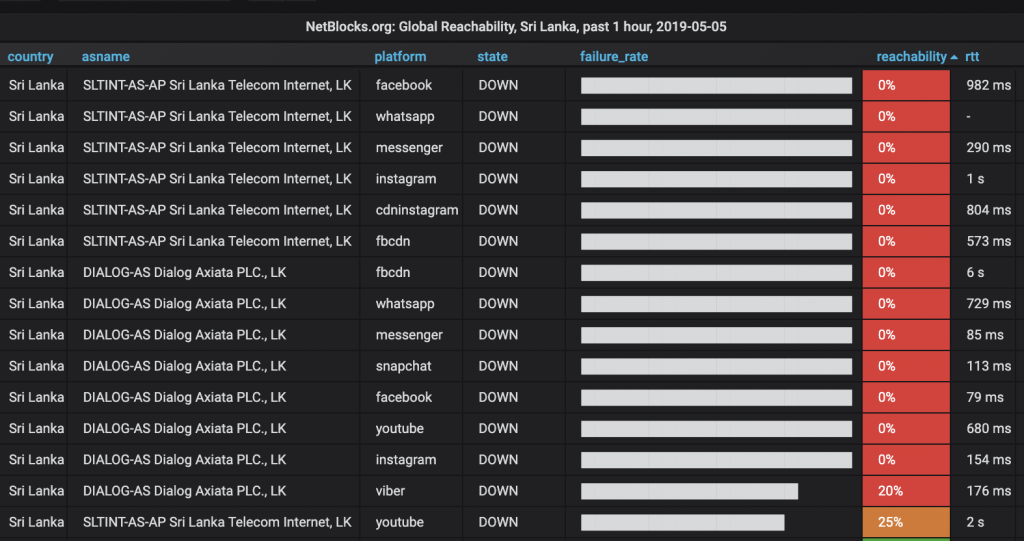