Access to social media and messaging apps has been restored in Sri Lanka as of 5:30 a.m UTC Tuesday, 30 April, on the ninth day after the services were blocked as a security measure following a series of deadly terror attacks.

Facebook, YouTube and other blocked services now all accessible with Sri Lanka’s leading internet providers including Dialog Axiata and Sri Lanka Telecom, Mobitel and others according to NetBlocks network measurement data.

Confirmed: Network data shows social media and messaging apps are in the process of being restored across #SriLanka, over a week after they were restricted following a series of deadly terror attacks #KeepItOn 📰https://t.co/CCNd4xONl2 pic.twitter.com/4Gjy3e81zQ

The new NetBlocks findings are based on 1000 network measurements, each consisting of latency and reachability status as observed from 60 vantage points across Sri Lanka between 5:00 a.m. and 7:00 a.m. collected with the assistance of volunteers across the country.

During the social media blockade, concerns were raised over impact to citizens’s ability to communicate and impart information in the midst of the crisis. In the immediate aftermath of the attacks, Sri Lankan internet users and the families of international visitors complained of difficulty checking up on the wellbeing of friends and family.

The incident is the second recorded instance of social media blocking in Sri Lanka, which previously blocked social media for just over one week after violence targeting minorities broke out in March 2018. 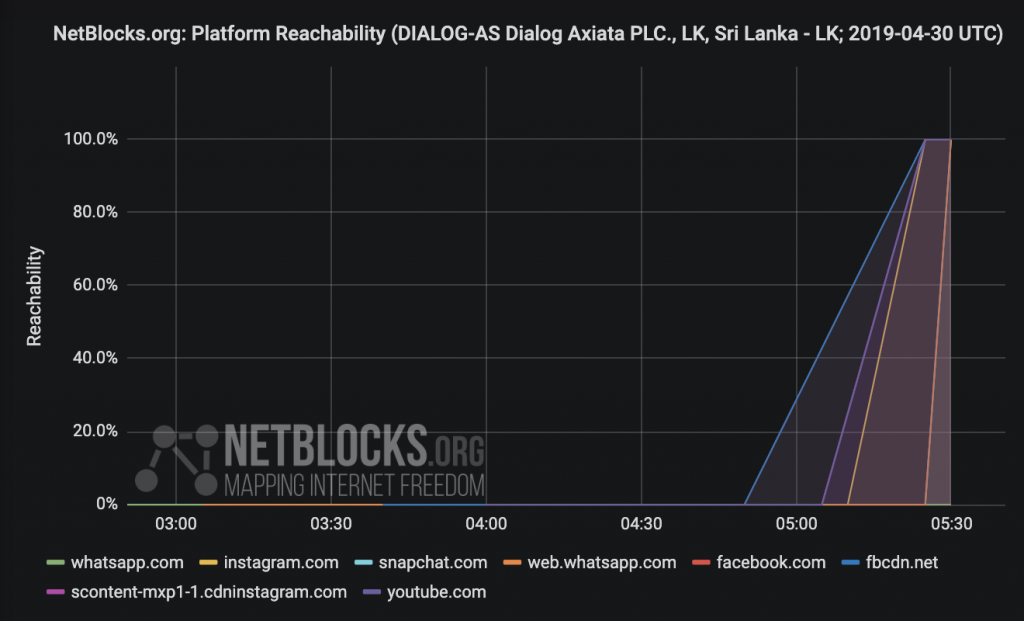