Network data from the NetBlocks internet observatory confirm that internet has been cut across most of Ethiopia from just after 9 a.m. local time (6:00 a.m. UTC) on Tuesday 30 June 2020 amid protests and unrest.

Cellular networks which the majority of users rely on remained cut through most of that period. Some regional disruptions are still indicated, while social media and messaging apps remain restricted with investigations ongoing.

Welcome back #Ethiopia! Real-time network data show much of the country and cellular network now back online 📈

The blackout comes amid protests in Addis Ababa after Oromo singer and activist Haacaaluu Hundeessaa was shot dead on Monday night. 34-year-old Haacaaluu’s work is associated with the movement that saw the removal of Ethiopia’s previous prime minister.

With #Ethiopia's internet shutdown in its third week, the first notable restoration of connectivity has just been registered.

The ongoing incident has nation-scale impact affecting cellular and fixed-line networks and is not attributed to any international issue, technical outage or cyber-attack. Observable connectivity hovered between 1% and 2% of ordinary levels through the shutdown’s initial hours with users also reporting difficulty getting phone calls connected. Connectivity gradually rose from 5% to 11% through the first week although ordinary users remained offline. Consistent with previous recorded government-ordered internet shutdowns, service has been restored to a small selection of subscribers during that time.

Update: On day 15 of #Ethiopia's internet shutdown, hour 345, real-time network data show a rise in connectivity with some users starting to coming back online.

In terms of severity and duration the internet shutdown has surpassed previously documented incidents in Ethiopia, including the information blackout following last year’s assassination and alleged coup attempt in the Amhara region. Network data show that the 2019 shutdown had total impact for over 100 hours and left the country largely offline for ten days. Aside from protests, Ethiopia has also previously used internet restrictions in an apparent bid to prevent cheating in school exams.

State-owned telco Ethio Telecom operates a national monopoly, which expedites the process of deactivating national internet and telephony services providing Ethiopian authorities an effective internet “kill switch.”  A tendering process was opened up to external telecommunications industry investors last year but it remains unclear whether those arrangements can now realistically proceed, and if so whether they could deliver a more resilient internet topology in the current political climate.

Beyond impact to fundamental rights, each day the internet remains shut in Ethiopia runs up a bill in excess of $4.5 million USD in terms of economic impact to GDP according to the Cost of Shutdown Tool, which combines telecom industry and development indicators to assess the impact of internet disruptions on digital prosperity.

Ethiopia’s reactive approach to political developments often involving limitations on public expression has been subject to domestic and international criticism. Authorities allege that internet use drives ethnic unrest, citing the circulation of misinformation as grounds for the country’s information blackouts.

Politically motivated Internet shutdowns have intensified in severity and duration under the leadership of Prime Minister Abiy Ahmed despite the country’s rapid digitalization and growing reliance on cellular internet connectivity through recent years. 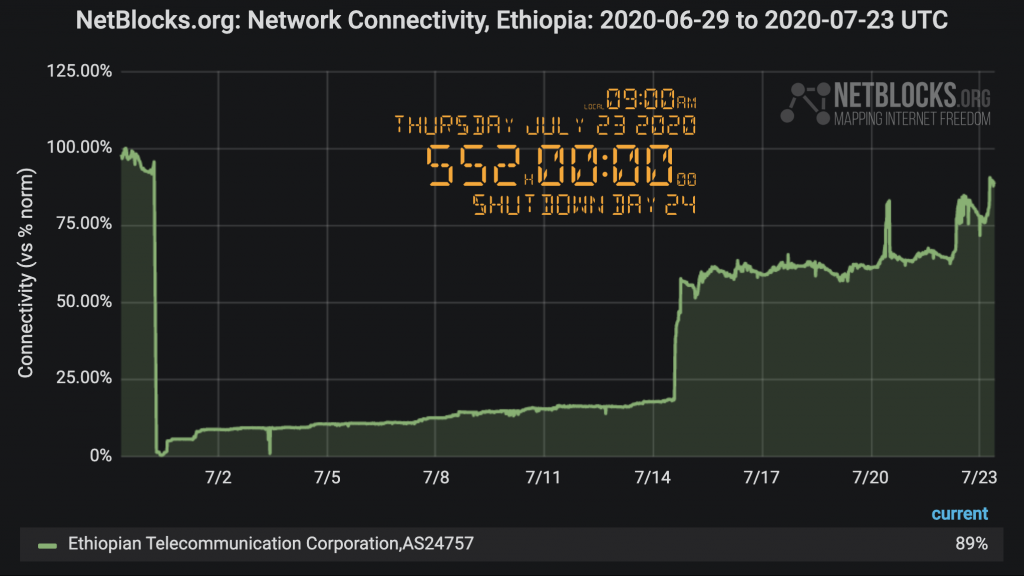 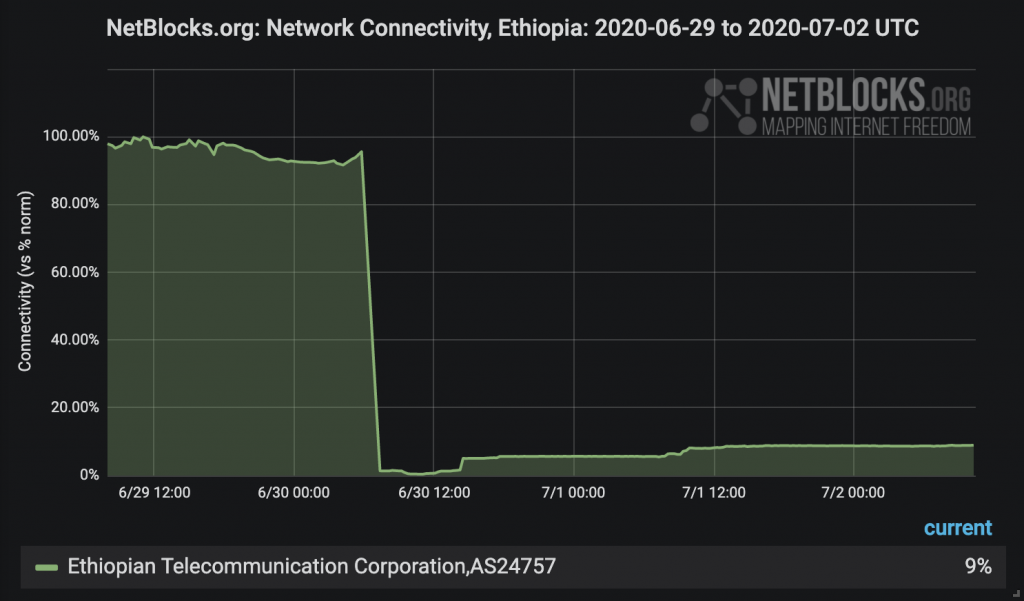