Network data from the NetBlocks Internet Observatory confirm Uganda is in the midst of an internet blackout continuing from 13 January 2021 up until the 18th, following prior social media and messaging restrictions recorded Tuesday 12 January 2021. Findings below reveal the extent of restrictions issued by order of the Uganda Communications Commission before, during, and after presidential and parliamentary elections held on the 14th.

Update: Basic network connectivity has returned as of the 18th, reaching 90% of ordinary levels by the evening. However, an extensive list of social media and messaging restrictions remain in place, similar to that observed prior to the elections:

Update: As internet connectivity partly returns to #Uganda, metrics show a similar pattern of extensive social media and messaging restrictions as prior to election day with some new additions.

Hence, where service is back it remains less than usable.

Internet service was shut down across major providers as of 7 p.m. Wednesday 13 January 2021 leaving citizens in an information vacuum that has remained in place during the preliminary announcement of results:

⚠️ Confirmed: #Uganda is now in the midst of a nation-scale internet blackout on the eve of elections; real-time network data show national connectivity falling to 33% of ordinary levels as per government order in effect from 7 pm 📉 #UgandaDecides2021

Update: It's now 6 pm in #Uganda where vote counting is under way amidst a national information blackout. Real-time network data show internet connectivity at just 12% of ordinary levels, with poll results expected in 48 hours 📵📉 #UgandaDecides2021

Adding to this body of technical evidence, investigative reporting from AFP identified an order issued to providers requiring the restriction of access to some 100 VPN services in Uganda, a figure that is difficult or impossible to obtain through network measurement alone. 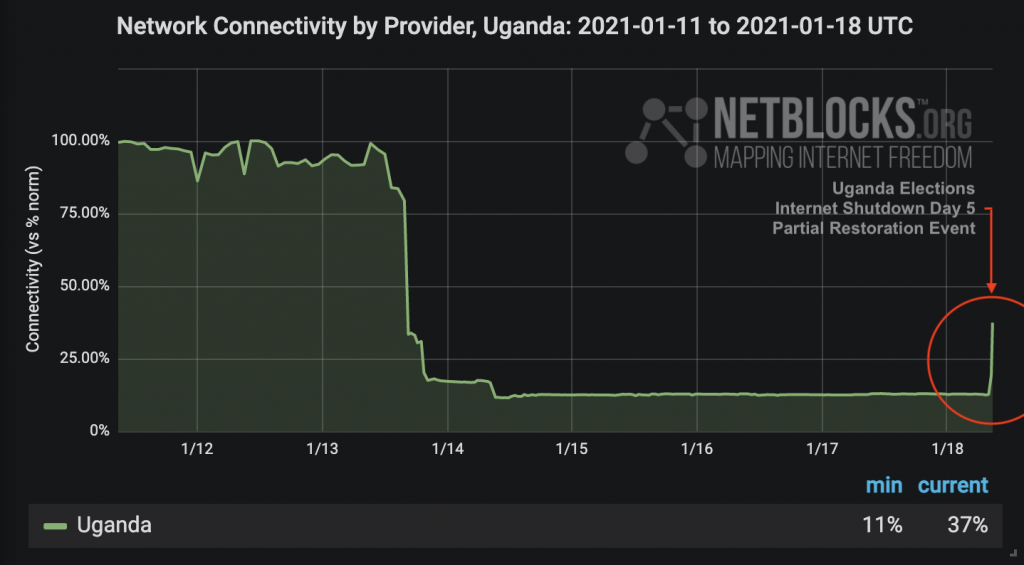 Findings are drawn from a set of 400 NetBlocks Web Probe metrics.