Network data from the NetBlocks internet observatory confirm that internet has been disrupted in Guinea as of 7:30 a.m. UTC Friday 23 October 2020 as the West African country prepares to announce official results from this week’s presidential elections. The incident has nation-scale impact and is likely to significantly limit the domestic and international flow of information.

Tensions are high in capital Conakry as supporters of opposition candidate Cellou Dalein Diallo and incumbent President Alpha Conde each appeared to declare their candidate’s victory ahead of the official announcement.

Technical measurements from the observatory confirm major disruptions on leading cellular network operator Orange, with national connectivity registering at just 9% of ordinary levels. Meanwhile, MTN and Cellcom exhibit partial restrictions limiting access to major social media and communication platforms. The incident has been registered with a duration of 100 hours.

Elections in Guinea have been held under an increasingly restrictive media environment that include national internet restrictions. In March 2020, NetBlocks confirmed disruptions to internet connectivity on Guinea’s internet backbone supplied by submarine cable. Following international expressions of concern, the measures were rolled back by GUILAB, the organization responsible for Guinea’s international link via the ACE subsea cable. The incident was nevertheless followed with partial disruptions as access was again restricted on polling day.

Authorities have not issued any public statement in relation to the restrictions. 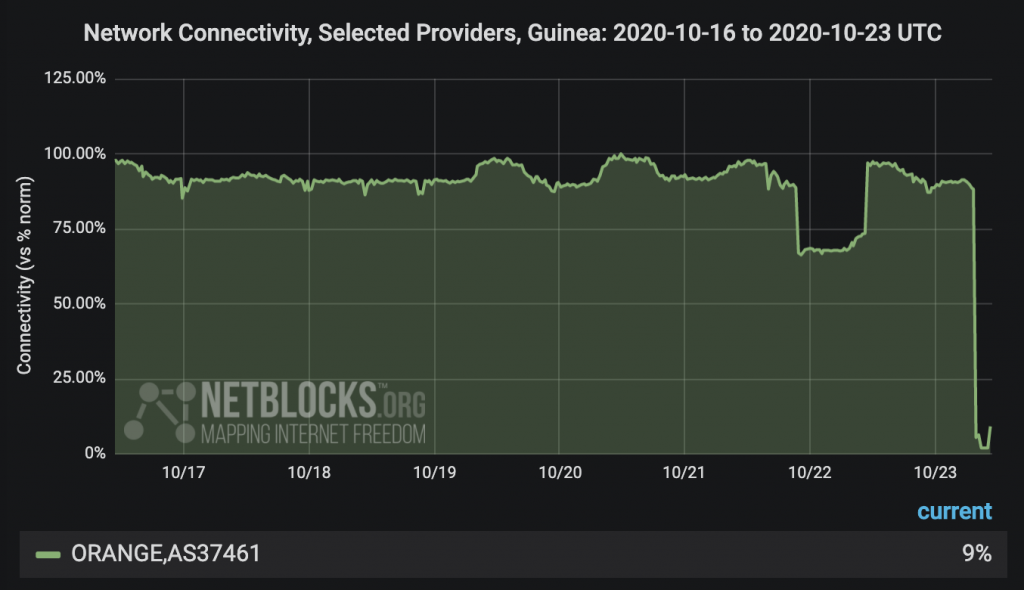