NetBlocks metrics confirm an internet blackout in the Republic of Congo on the day of presidential elections, Sunday 21 March 2021. The incident has a recorded duration of three days.

⚠️ Confirmed: Internet has been shut down in the Republic of the #Congo on the day of presidential elections.

Network data show a near-total collapse of national connectivity from midnight local time. The incident is ongoing as polls are due to open 📉

Metrics show a near-total loss of connectivity from just around midnight local time on the morning of the elections. The internet disruption continued as polling took place and as votes were counted, and service was not substantially restored until after election results were announced on Tuesday night.

Update: Internet has been substantially restored in the Republic of #Congo after the announcement of election results on Tuesday night, with incumbent Sassou Nguesso taking another term as President; incident duration ~3 days 📈

The incident follows a pattern of election day internet shutdowns in Congo-Brazzaville, with a similar information blackout imposed by authorities during March 2016 presidential elections.

Incumbent President Denis Sassou Nguesso, in power for a total of some 36 years, prevailed to take a fourth term as predicted at the polls, which were panned for their lack of transparency.

Work is ongoing to monitor and evaluate the incident. 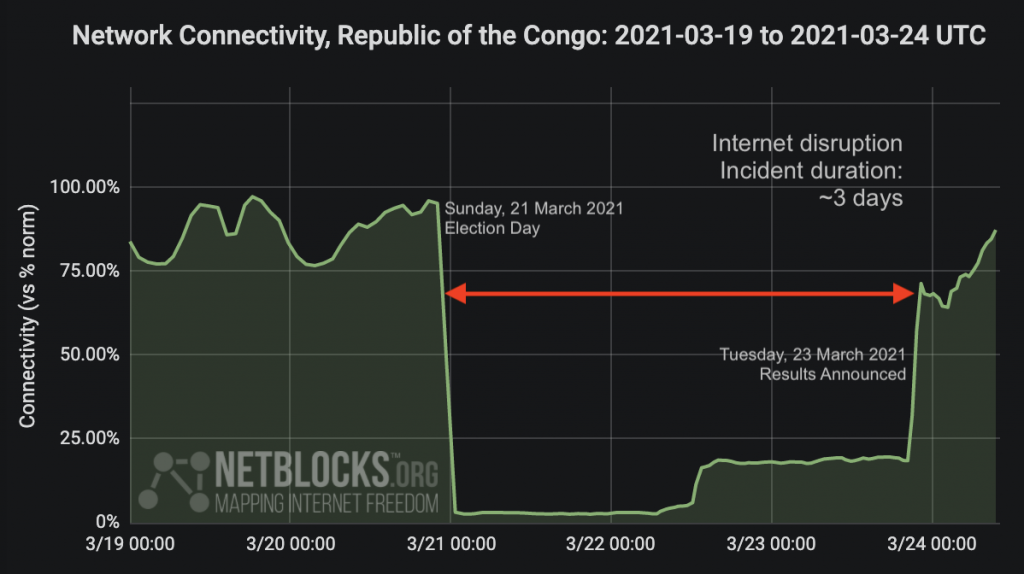