Network data from the NetBlocks internet observatory confirm that internet has been cut across the Republic of Guinea as of 8:00 p.m. UTC, ahead of parliamentary elections scheduled for Sunday, 22 March 2020.

Update: Social media has been blocked in Guinea as of Saturday evening. See new report for details.

Update: Some connectivity has returned after a near-total blackout lasting approximately two hours, although it remains unclear how much access is restored and whether connectivity will be sustained.

Update: Internet connectivity has been restored in #Guinea with users back online for now; data show impact across all major network operators; decision to schedule internet cuts for maintenance on election weekend had raised international concern 📉📈

Technical measurements show all six networks in the West African country including leading operator Orange have shut down, with national connectivity now at 12% of ordinary levels. Cellular and fixed-line networks are similarly affected.

Subsea cable repair works had originally been scheduled to coincide with parliamentary elections this weekend were widely condemned by observers and rights monitors, on the basis of their impact to the democratic process and transparency.

However, hours before the cut on Friday, GUILAB, Guinea’s telecommunication infrastructure operator, assured the public that maintenance work would be postponed until after elections.

Users who were able to contact the outside after the cut expressed concern over the situation, which comes amid regional efforts to contain COVID-19 as Guinea faces its second confirmed case.

The near-total outage comes after a series of smaller daily cuts at around midnight over the last three days. 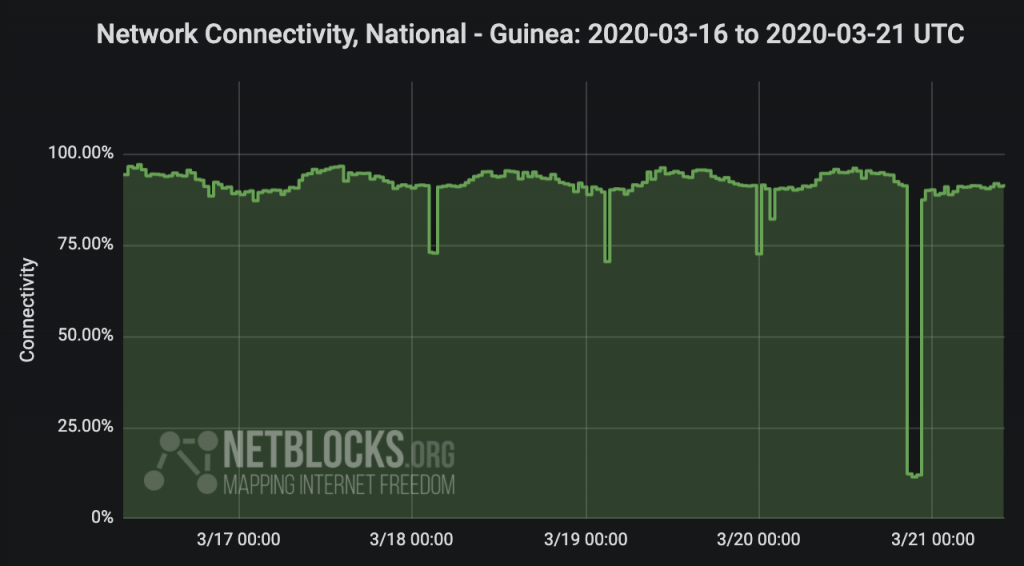