Network data from the NetBlocks internet observatory confirm that internet connectivity has been severely disrupted in Chad since the morning of Sunday 28 February 2021 amid reports of a deadly armed raid at the house of opposition candidate Yaya Dillo.

The incident is ongoing through Monday with only a slight rise in connectivity observed since time of onset. The disruption has regional variation and impacts major cellular networks Airtel and Tigo as well as some fixed-line services.

Work is ongoing to monitor and assess the situation. 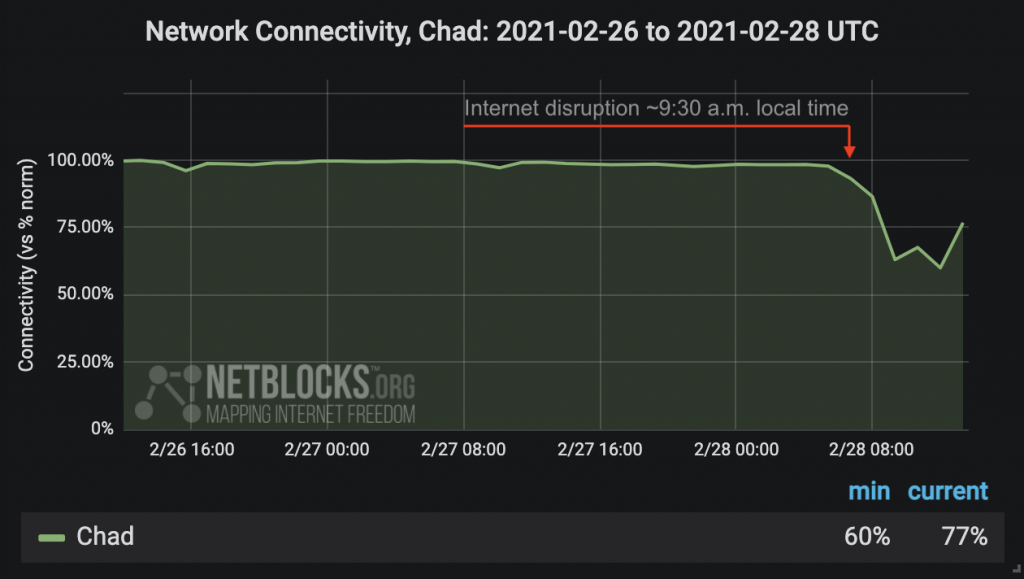 Chad has a long-running history of information controls used to manage public narratives during political crises and security incidents.

Internet shutdowns and service restrictions documented by NetBlocks have become core tactics with the rising prevalence of internet access driven by mobile subscribers in the north-central African country.

On 22 July 2020, NetBlocks documented the restriction of the WhatsApp messaging service in Chad following a deadly altercation involving the military in N’Djamena. On 3 August 2020, the Minister of Communication confirmed to AFP that a “temporary measure” had been taken to prevent the alleged “dissemination of messages of incitement to hatred and division,” but stopped short of providing specific details.

NetBlocks records also show that Chad previously blocked social media for over a year in 2018/2019, triggering a legal challenge that is understood to have contributed to Millicom’s decision to sell off its Tigo service to Maroc Telecom.

Network measurement data confirm that previously blocked social media and messaging platforms in #Chad are now available via multiple internet providers that had complied with the censorship order 📈 pic.twitter.com/V6rKhC8BeT