Network data from the NetBlocks internet observatory confirm that messaging app WhatsApp is blocked in Chad from Wednesday 22 July 2020. Real-time metrics show that the service remains unavailable as of Tuesday 18 August 2020.

Update: Live network data from #Chad confirm that #WhatsApp remains blocked on Airtel and Tigo despite hopes earlier today of a restoration.

Rights defender @koundougoumi has called for a day to speak up for internet rights, 5 September 2020 🗓 #Tchad

No explanation was initially provided by authorities, sparking speculation as to the basis of the restrictions. NetBlocks spoke with users who suspected a connection to a deadly altercation between an army colonel and a mechanic at a market in N’Djamena.

The restrictions came just as the International Monetary Fund announced additional credit to the Chadian government of $68.49 million in order to balance losses incurred by the COVID-19 pandemic.

Days after the first publication of this report, government sources speaking on background appeared to support the narrative that the restrictions were related to the market incident. On 3 August 2020, the Minister of Communication confirmed to AFP that a “temporary measure” was taken to prevent the alleged “dissemination of messages of incitement to hatred and division,” but stopped short of providing specific details. 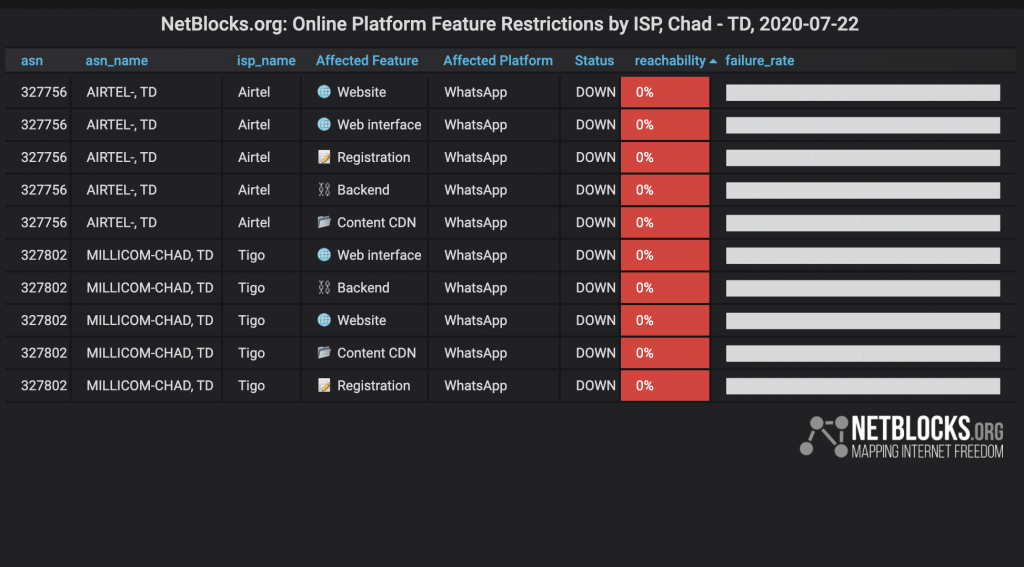 500 Internet performance metrics collected from an initial 10 observation points and a wider set of analytics data confirm on 22 July 2020 that WhatsApp frontend, backend and CDN servers were restricted in Chad. Facebook, Instagram, YouTube and Twitter remained available. Findings are consistent with previous internet restrictions documented in Chad and there is no indication of a technical fault.

Affected users are able to regain access via VPN services which circumvent internet censorship by tunnelling network traffic to other countries.

NetBlocks records show that Chad previously blocked social media for over a year, triggering a legal challenge and ultimately compelling Millicom to sell the Tigo service to Maroc Telecom.

Network measurement data confirm that previously blocked social media and messaging platforms in #Chad are now available via multiple internet providers that had complied with the censorship order 📈 pic.twitter.com/V6rKhC8BeT