Internet providers in Sri Lanka are continuing to block access to the major social media networks and messaging apps, as well as extending the ban to cover VPN applications, as of Thursday according to new NetBlocks network measurement data.

The #SriLanka social media blockade has entered its sixth day with the president reportedly considering a permanent ban. Although messaging apps and VPNs are blocked, Twitter remains availablehttps://t.co/rwZpmbAuQF pic.twitter.com/0soxSMLw4Q

Of the major U.S. online platforms, only Twitter remains broadly available to users in Sri Lanka. Data indicates that some users also remain able to access Snapchat as some providers have not blocked it. LinkedIn, China’s QQ and Weibo, and Russia’s VK services remain unaffected.

Data shows that multiple Sri Lankan internet providers briefly lifted the social media ban on Wednesday, after which it was reinstated. News reports say the president changed his mind about ending the restrictions and may now block the platforms permanently:

Data shows that multiple #SriLanka internet providers briefly lifted the social media ban on Wednesday, after which it was reinstated. News reports say the president changed his mind about ending the restrictions and may now block the platforms permanentlyhttps://t.co/rwZpmbAuQF pic.twitter.com/yN2IY9ayVT

The outages continue amid reports that the president said he is now considering making the ban permanent, following its temporary introduction following Sunday’s attacks:

"We were planning to lift the Social media restriction today. But yesterday there were lot of wrong information shared so we are reconsidering it now. I will meet the heads of these social media platforms today. I may ban it completely if this is not controlled" President

On Sunday, Sri Lanka restricted access to social media platforms following a series of deadly attacks on churches and hotels. VPN restrictions were subsequently targeted users who attempted to circumvent the censorship measures, which the government says are in place to prevent the spread of disinformation. Critics continue to caution that the filtering measures are an impediment to independent media coverage and free expression as Sri Lanka comes to terms with the attacks.

In addition to the online platform blocks, Sri Lanka joined a handful of states that implement controls on VPN services and internet protocols that tunnel network traffic from point to point.

Virtual private networks enhance privacy and also allow users to work around internet restrictions. VPN usage is common in among journalists and in ICT, consulting and financial sectors, where they are often required for security reasons.

Data showed that one of the most prominent commercial VPN providers was blocked at 4 AM UTC Monday morning, 9:30 AM local time one day after the attacks and initial response:

Sri Lanka previously blocked social media in March 2018 for a period of eight days, restricting access to a similar set of digital platforms and incurring an estimated $30m cost to the country’s GDP. 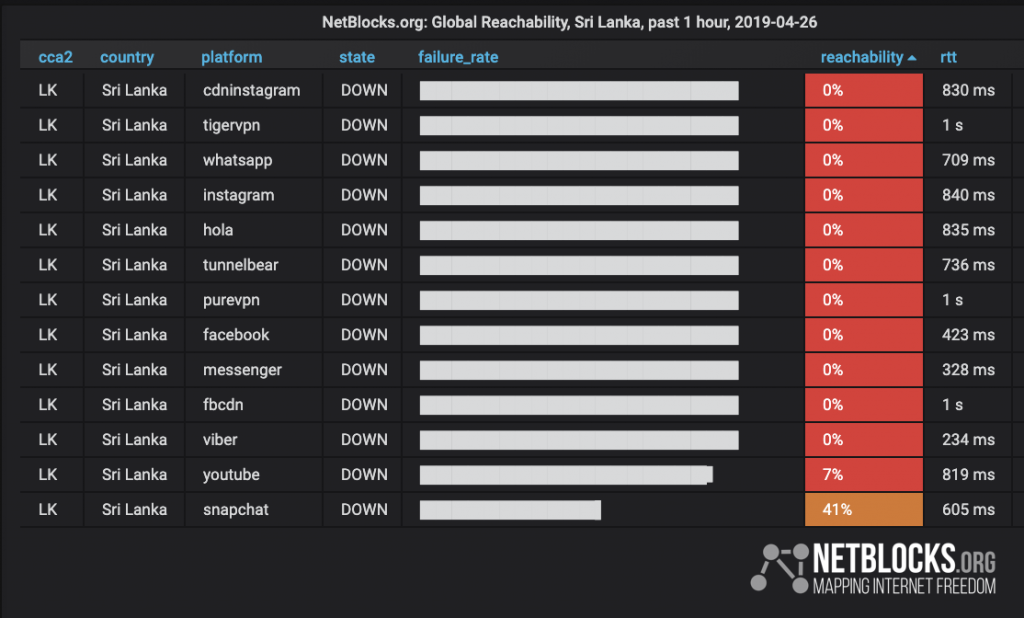