Network data from the NetBlocks internet observatory confirm that internet connectivity has been significantly disrupted in Algeria, sending much of the country offline for one hour shortly after social media and messaging services became unavailable on the morning of Sunday 13 September 2020.

Update: Online service disruptions have continued through Monday, with another hour-long internet blackout registered at 12:30 UTC. 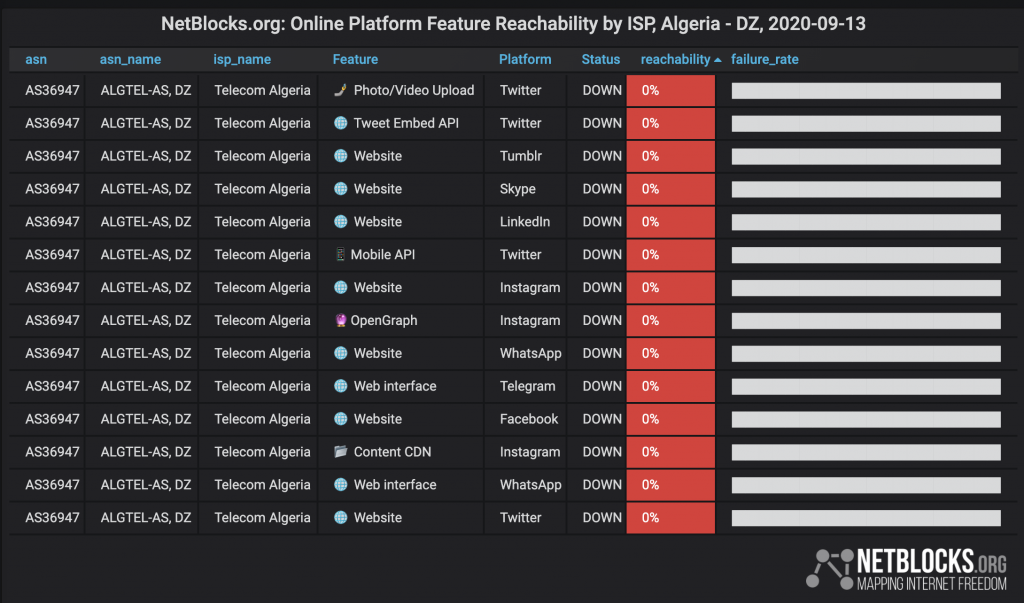 Some users were initially able to regain connectivity via VPN services, however the subsequent loss of connectivity between approximately 13:30 UTC and 14:30 UTC made circumvention options unworkable for a period of one hour.

Students in Algeria are currently sitting Baccalauréat school exams, and the restrictions are consistent with previous internet disruptions documented by NetBlocks in Algeria during exams.

The restrictions are understood to be a measure to prevent the distribution of leaked exam papers, however citizens have complained about the disproportionate impact to Algeria’s digital economy, daily life and the fundamental right to free expression.

NetBlocks recently documented an extended nation-scale internet disruption beginning 20 August 2020, which left most users with unusably slow service for several days. Previous targeted internet disruptions in Algeria have been identified during protests against military influence, following calls on YouTube for a public uprising, amid protests against Abdelaziz Bouteflika, and during last year’s school examinations.