Network connectivity data from the NetBlocks internet observatory shows a slow recovery for Venezuela, with 80% of the country still offline after a second nationwide power outage hit the country on Saturday. The setback followed a nationwide blackout on Thursday which left only 2% of the country connected. Venezuela has been largely offline for 68 hours with only pockets of intermittent connectivity amid an ongoing presidential crisis.

Gains in connectivity have been lost through a series of three distinct new outages as shown in NetBlocks’ network connectivity charts.

The outage is likely to have had a significant and lasting impact on Venezuela’s ailing economy: A study by Venezuelan daily Efecto Cocuyo in December using the NetBlocks and Internet Society Cost Of Shutdown Tool based on World Bank development indicators from the previous published year, calculated that a total outage of connectivity alone would cost the economy more than 400 million US dollars per day.

The methodology takes into account lost business in  the public and private sectors, opportunity cost and investor confidence balanced against the country’s digital economy size and total GDP.

Venezuela is reliant on power and internet connectivity to facilitate use of cash cards and mobile payments because of hyperinflation and the the scarcity of viable local cash currency.

Venezuela had been expected to hold some of its largest protests on Saturday after interim president Juan Guaidó called citizens to the streets through social media, which were met with a 20-hour block of YouTube by state-run internet provider ABA CANTV (AS8048). Media coverage emerging from Venezuela on Saturday immediately prior to the new outage showed a strong response from state police against the public assemblies.

The current outages are the largest measured in 2019 in magnitude and extent, spanning across the capital and all population centers of Venezuela. Hospitals have reported failures and loss of life although the overall human impact to local communities remains unknown. 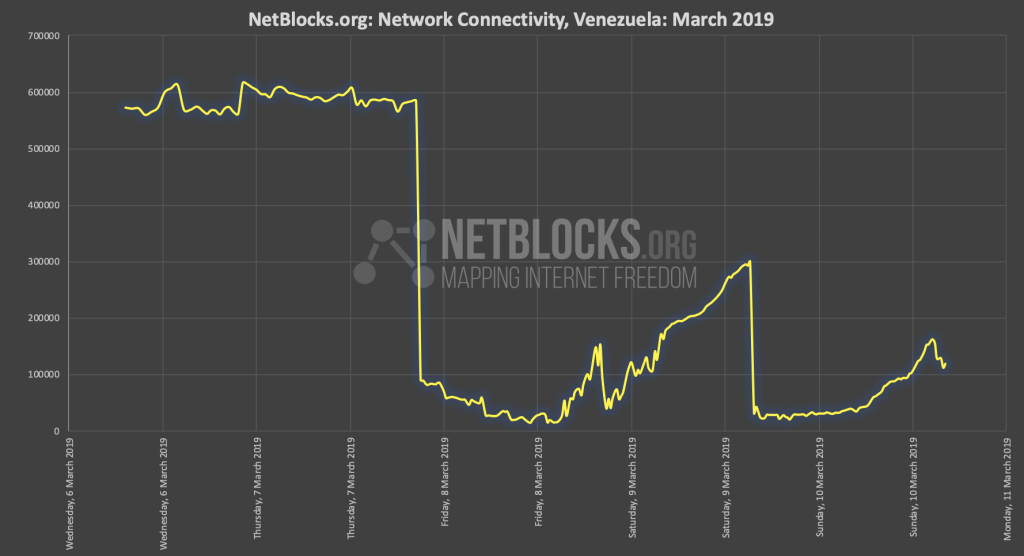 NetBlocks diffscans, which map the entire IP address space of a country in real time, show internet outages corresponding to power cuts in the region. Network measurements have proven to be an effective measure of disruption to Venezuela’s infrastructure through recent days.

Venezuela experiences frequent power cuts, and Venezuela started power rationing and reduced its electricity consumption to about 14,000 megawatts at peak hours because of the economic crisis in 2018. However the nationwide outages are unprecedented in magnitude, extent and duration NetBlocks historic data suggest that incidents of this scale are vanishingly rare.

Update: 5:50 AM UTC: Real-time network data shows #Venezuela’s connectivity has dropped to 12% amid reports of an explosion at the electrical substation in Ciudadela, Caracas:

Update: 11:25 AM UTC 12 March 2019: 110 hours into the nationwide power outage Venezuela remains largely offline. Overall connectivity is currently at 40% severely limiting the flow of information and access to basic services:

Update: 7:55 PM UTC 12 March 2019: 119 hours after the onset of nationwide power outages Venezuela’s connectivity is up to 63%, marking significant progress in the restoration of utilities:

Update: 119 hours after the onset of nationwide power outages #Venezuela's connectivity is up to 63%, marking significant progress in the restoration of utilities #SinLuz #12Mar ⬇️https://t.co/8pljYDEYae pic.twitter.com/zcBeVkqnKG