As major electricity shortages and rationing continues across Venezuela, the lighting up of the 1,200 bulb Angel of Amparo, a towering 120-meter decorative arrangement in Maracaibo on the night of 4 May 2019 (local time) has received a mixed reaction from residents. Current NetBlocks measurement data indicates that more than half the city remains in darkness due to rationing measures.

The Angel of Amparo in #Maracaibo, previously lit outside schedule only on the deaths of Pope John Paul II and President Hugo Chávez, is now alight despite data showing electricity rationing and more than half of the city in darkness #SinLuz #4May ⬇️https://t.co/rkSIu0fr8w pic.twitter.com/RIY4ev4jWt

The angel monument, built from an arrangement of light bulbs consuming approximately 20 kW, has previously been lit outside of Christmas and scheduled events only on the deaths of Pope John Paul II and President Hugo Chávez.

The lighting up first sparked confusion, then frustration among Maracaibo residents with scarce access to power and critical services at a time when hospitals and ICU units have had to go with little or no power.

In subsequent hours, reports that the towering figurine had been lit up in memory of an old-time energy company worker left many indignant at the conspicuous display. Others ceded the lights in a city gone dark as a fitting memorial, or part of a power play as the country’s opposing camps each seek to win the hearts and minds of energy sector workers.

Venezuela continues to suffer intermittent power supply after a series of major outages following a nationwide power grid failure which knocked the country into darkness in March.

Data shows that Maracaibo and the state of Zulia have been among those most affected by the outages and subsequent power rationing. The incident highlights growing frustration and a perceived divide between parts of the country subject to intensive energy restrictions and those which have been largely spared from the measures.

The most recent power outage with national impact was on April 10 2019, when an estimated 90% the country’s network connectivity was disabled. The power grid has since seen a degree of stabilization although it has come at the cost of routing and intensive power rationing primarily affecting regions outside the capital. 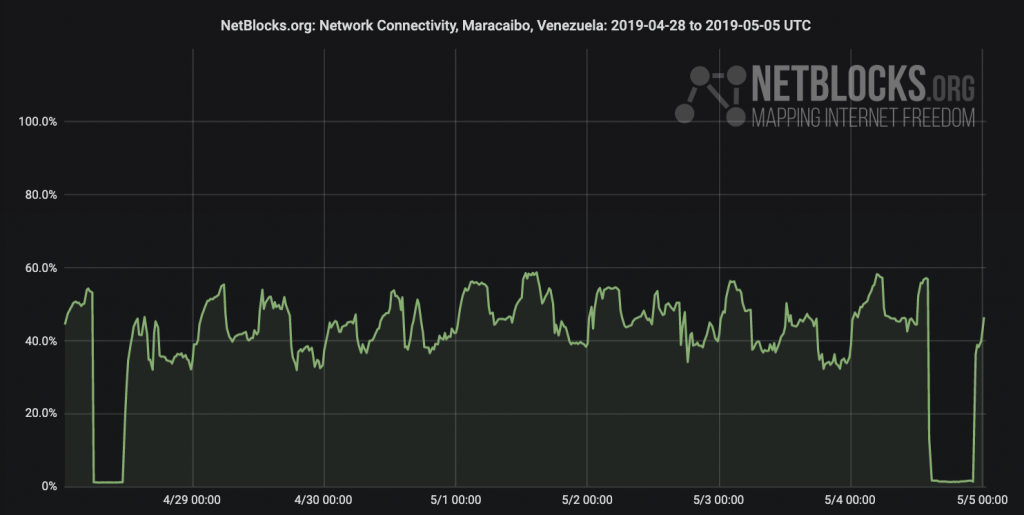