The NetBlocks internet observatory has identified a nationwide power outage across Venezuela as of 8:40 p.m. Monday 22 July 2019, severely affecting most states and cities including Caracas, sending approximately 94% of the country’s telecommunications infrastructure offline.

All states of Venezuela have been severely impacted by the new power outage with only limited connectivity remaining. The new incident has similar severity to the power disruptions earlier in 2019 with no immediate signs of recovery evident in network data in the last hour.

The disruption comes months after the failure of Venezuela’s national grid, and is one of the most severe to strike the country since the onset of national failures on 7 March 2019.

Most states of Venezuela are now almost totally offline, with only limited network connectivity. In previous incidents hospitals reported failures and loss of life caused by failure of emergency and long-term healthcare systems although the overall human and economic impact remains unknown.

Update: 2:20 a.m. 23 July 2019 UTC: As darkness falls on Venezuela, data show few signs of recovery five and a half hours after onset of the power outage. National internet connectivity remains below 10% with electricity still cut in most states:

Update: As darkness falls on #Venezuela, few signs of recovery five and a half hours after massive power outage; national internet connectivity remains below 10% with electricity cut in most states #ApagónNacional #SinLuz #22Jul ⬇️https://t.co/YoUArNw6KQ pic.twitter.com/ZZ3u6ciKPT

Update: 2:00 p.m. 23 July 2019 UTC: Power remains cut in much of Venezuela 17 hours after the power outage onset. National internet connectivity remains around 40% following a period of recovery and a new disruption:

NetBlocks diffscans, which map the entire IP address space of a country in real time, show internet outages corresponding to power cuts in the region. National connectivity in Venezuela reports are measured against the nominal connectivity level prior to the first power grid failure in March, providing a consistent baseline for reporting. 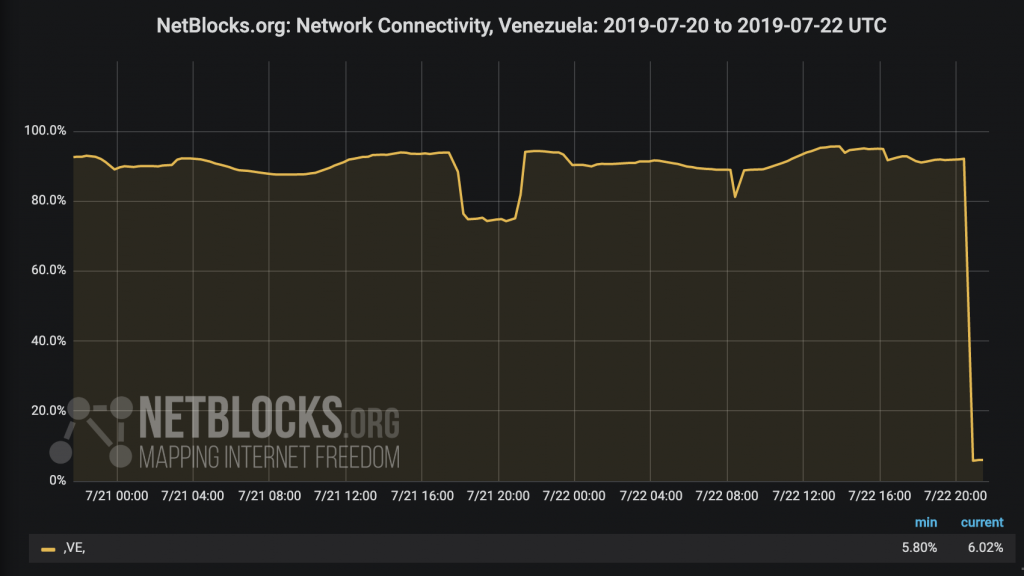 NetBlocks is a civil society group working at the intersection of digital rights, cyber-security and internet governance. Independent and non-partisan, NetBlocks strives for an open and inclusive digital future for all.