Network data from the NetBlocks internet observatory confirm that multiple telecommunication networks in Iran have been disconnected on the morning of Tuesday, 3 March 2020. 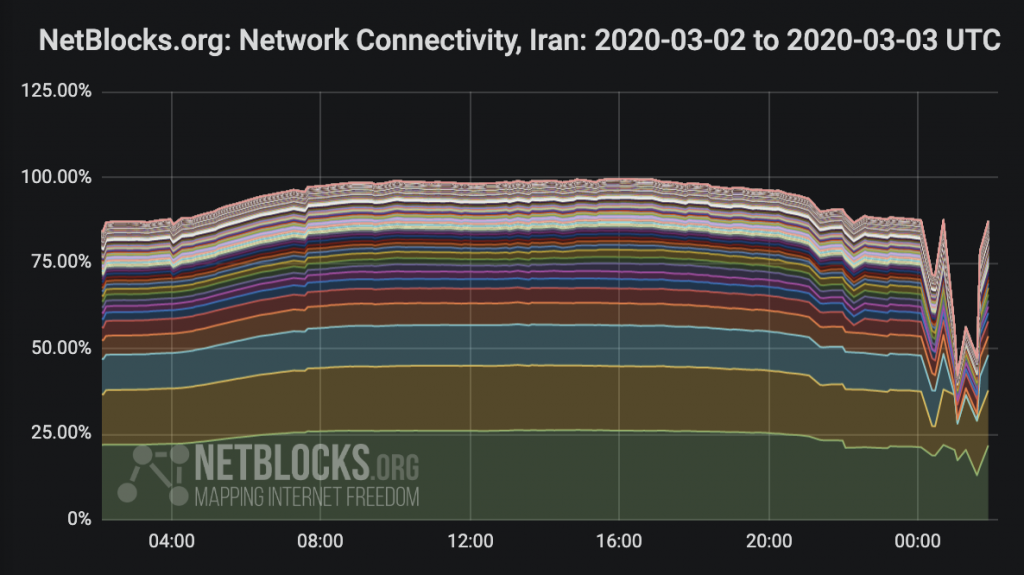 Most major providers including the Iran Telecommunication Company, RIghtel and Irancell and Pars are affected and were unreachable internationally for an hour before some connectivity returned.

Network data show a distinct fall in connectivity with several of Iran’s leading network operators from approximately 0:30 a.m. UTC affecting cellular and fixed-line operators. National connectivity fell to a low point of 50% of ordinary levels for a period during the morning.

The disruption comes as Iran struggles to tackle the domestic coronavirus outbreak, facing an upswell in online criticism as well as disinformation about the health crisis online.

Iran has faced  series of network disruptions through recent months, with some attributed to external factors and others to state information controls to control public protests.

On 8 February 2020 internet access was cut in Iran as a response to a cyber-attack after authorities activated the “Digital Fortress” isolation mechanism.

On 19 December 2019, Iran was one of several countries to be affected by an international network failure that also caused widespread disruption to Google services and sparked concerns about intentional blocking.