Network data from the NetBlocks internet observatory confirm that Facebook Live video streaming features have been restricted in Jordan on multiple providers on Wednesday 29 July 2020. Real-time metrics show that the feature was restored some hours later.

The restrictions came into place on Wednesday amid protests against the closure of Jordan’s teachers’ syndicate, during which a number of participants were arrested. Authorities also imposed a gag order, preventing local media from reporting on events and limiting online speech.

Update: Facebook Live streaming servers have again been restricted on Monday 3 August 2020, 5:30 p.m, and at similar times on Tuesday and Wednesday. The follow-up restrictions came as authorities reportedly close off streets to limit demonstrations which have nevertheless continued. Further incidents have been recorded as protests have flared up in the following days.

Update: Facebook video CDN servers have again been restricted in #Jordan as late-night Teachers' Union protests flare up in Karak amid reports of arrests 📉

Update: Facebook video CDN servers are again restricted in #Jordan amid a new wave of Teachers' Union protests in #Amman and #Irbid scheduled to continue through the coming week; the disruptions typically come into effect on protest evenings 📉⏱

The Internet restrictions vary by provider and come despite the cancellation of tonight's Teachers' Syndicate protests; see live report for updates 📉

Affected users were are to regain access via VPN services which circumvent internet censorship by tunnelling to other countries. No court order or lawful basis has been presented by authorities or operators at the time of writing.

5000 Internet performance metrics collected from 100 observation points and a wider set of analytics data confirmed that Facebook video CDN backend servers were restricted in Jordan and provided a timeline for the disruptions. 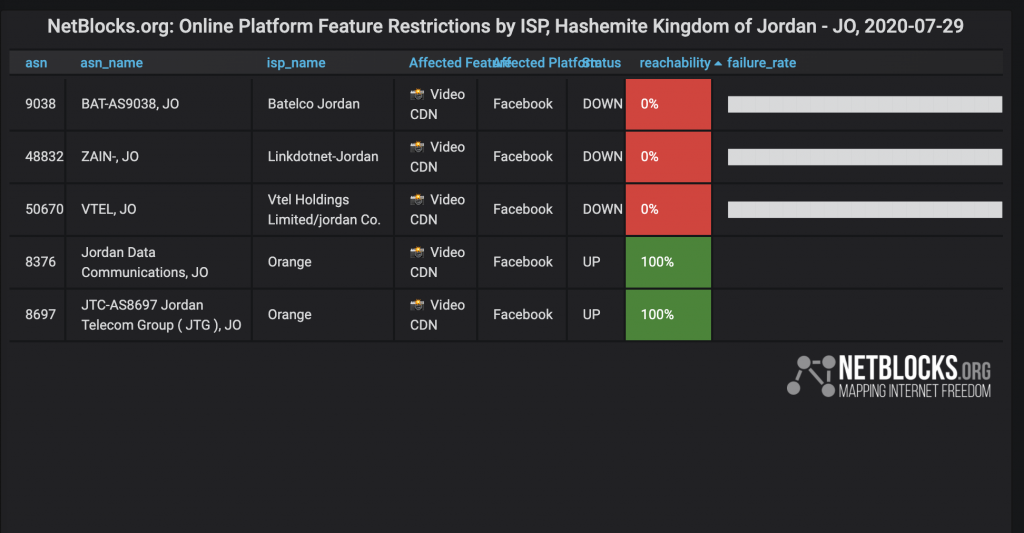 Which countries use targeted platform restrictions?

Jordan has a comparatively free and open internet, hence the restrictions can been seen as a setback for media freedom and fundamental rights in the kingdom. Similar restrictions appear in NetBlocks data sets during previous moments of political significance and investigations are ongoing into their purpose and intent.

As governments typically block entire platforms during unrest, targeted restrictions of specific features are rare but not unprecedented at global scale. NetBlocks previously documented targeted feature restrictions in May 2019, when Indonesia targeted Twitter upload servers preventing users from posting photos and videos without a VPN.

In that incident, the policy of restricting authentic content from protest locations appeared to contribute to the spread of misinformation because users resorted to sharing outdated or mis-located video clips.