Backend servers for each of the social and messaging platforms were partially blocked in Indonesia as of Wednesday 22 May 2019 after authorities ordered a social media blackout amid an escalation of election protests. The restrictions are now entering their third day and users have continued to report social media “throttling,” or a perception slowed-down connectivity when using social and messaging apps.

80,000 network measurements taken from over 700 vantage points across Indonesia now provide conclusive evidence of the mechanism, scope and extent of filtering deployed by the country’s internet providers to target Twitter image and video upload features, in addition to Facebook, Instagram, WhatsApp and Telegram services. 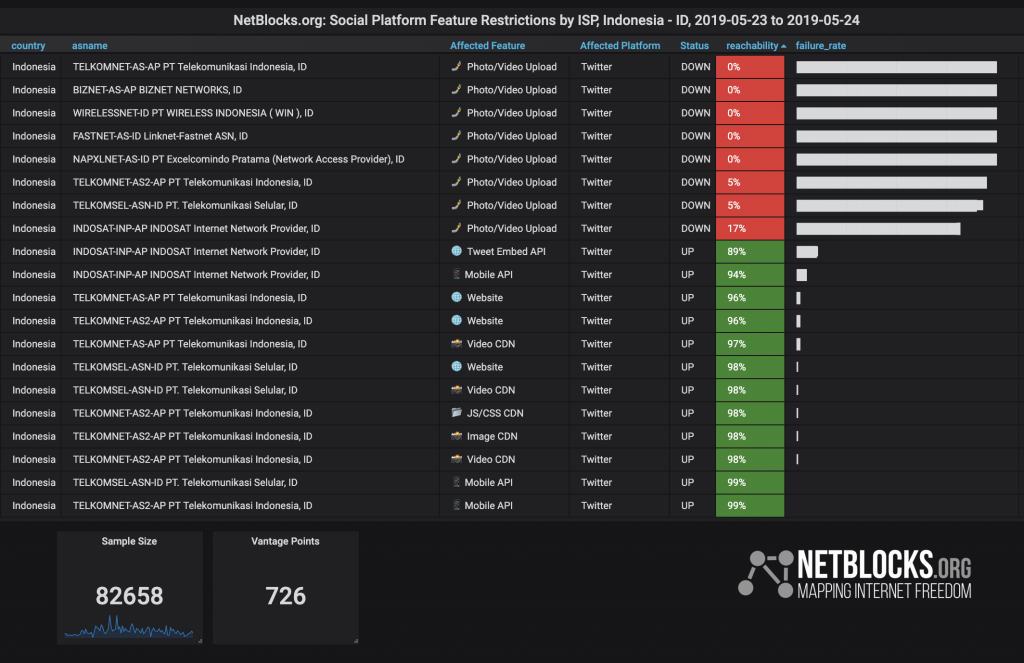 Study results show that photo and video uploads are blocked, while API, backend, while basic features have been intentionally left functional. NetBlocks data show that internet providers Telkom, XL Axiata Tbk (formerly PT Excelcomindo Pratama Tbk) and Indosat are among a set of ISPs that have opted for selective filtering, which allows Twitter to continue functioning while preventing users from uploading or sending their own photographs and videos.

Authorities tend to implement total platforms blocks as was the case in Sri Lanka earlier this month following a series of deadly terror attacks. Indonesia’s selective technique is not without drawbacks — it will prevent publication of genuine, authentic footage from the scene of demonstrations while doing little to prevent the circulation of existing disinformation campaigns.

Primary websites belonging to some of the services remain reachable according network data. Facebook backend servers used by Facebook Messenger and Instagram appear among those affected as well as those used by WhatsApp and Twitter, limiting image and video sharing features. Telegram includes censorship circumvention measures although users also report having difficulty with it too.

Findings are drawn from a set of internet performance measurements collected from across Indonesia in addition to a larger global control data set, providing a representative view of network performance and service reachability via multiple internet service providers.