Network data from the NetBlocks internet observatory confirm targeted disruption to internet access Papua, Indonesia. The disruptions come as protests against discrimination are being countered by Indonesian security personnel, amid renewed calls for an independence referendum from pro-separatist groups.

Major network outages have been identified in Jayapura and surrounding regions on Wednesday 21 August 2019 between 8:00 a.m. and 10:00 a.m. UTC with state-owned provider Telkom (PT Telekomunikasi Indonesia Tbk). Technical measurements show signs of restrictions through previous days, although Wednesday’s disruptions mark an escalation in the restriction of telecommunication services.

West Papuans allege systemic racism and discrimination, while Indonesia says it has sent the security personnel to counter violence and arson. Violence has been exacerbated after inmates escaped from prison on Monday while protesters were on the streets. Throttling, or the slowing of connectivity speeds, has been reported in affected parts of Indonesia since the beginning of the week.

NetBlocks previously reported the blocking of social media and messaging platforms including Facebook, Twitter and WhatsApp in May 2019. Investigations identified a sophisticated filtering regime targeting video and photo uploads. In that instance, filtering measures were implemented by authorities to suppress post-election protests. 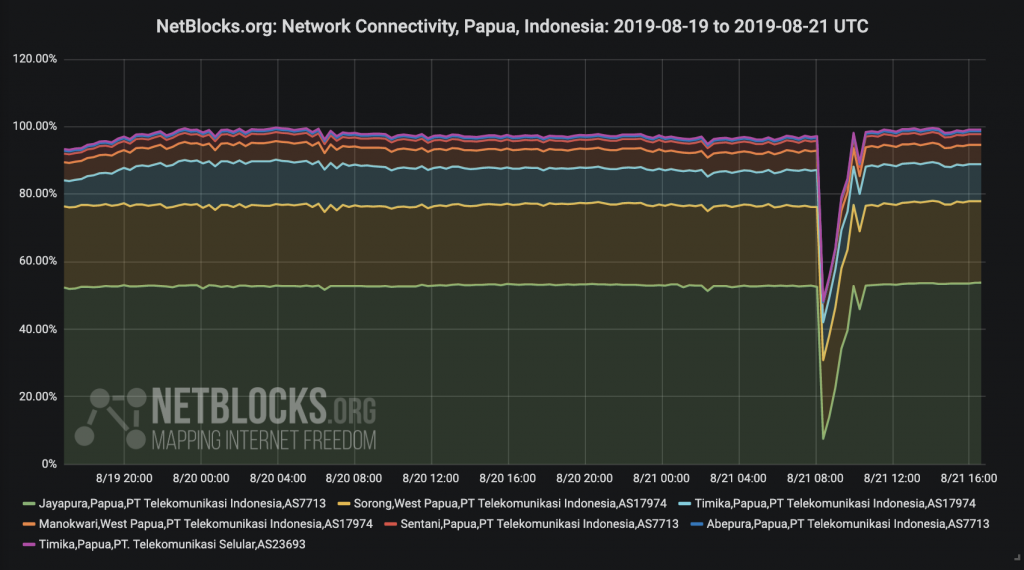