Corroboration of the targeted internet disruption comes as AP News reports that the opposition candidate’s home has been surrounded by security forces.

Data are consistent with users report emerging of difficulty reaching the Messenger app and Facebook social media platform in the same time window. The services remain blocked as of 8:40 p.m UTC, whil Twitter remains available and WhatsApp is partially usable due to the availability of backup servers.

Local media had raised concerns over the potential for a politically motivated internet disruption in recent days.

Election integrity in Togo has been in the spotlight following the dismissal of the National Democratic Institute election observation assistance mission which had been helping local monitors track conduct during the polls.

.@NDI is deeply troubled by the expulsion of NDI staff from #Togo & restrictions on election monitoring. Read statement from @ambDmitchell: https://t.co/VW6NFagGYl

Investigations continue into the context and impact of the disruption. 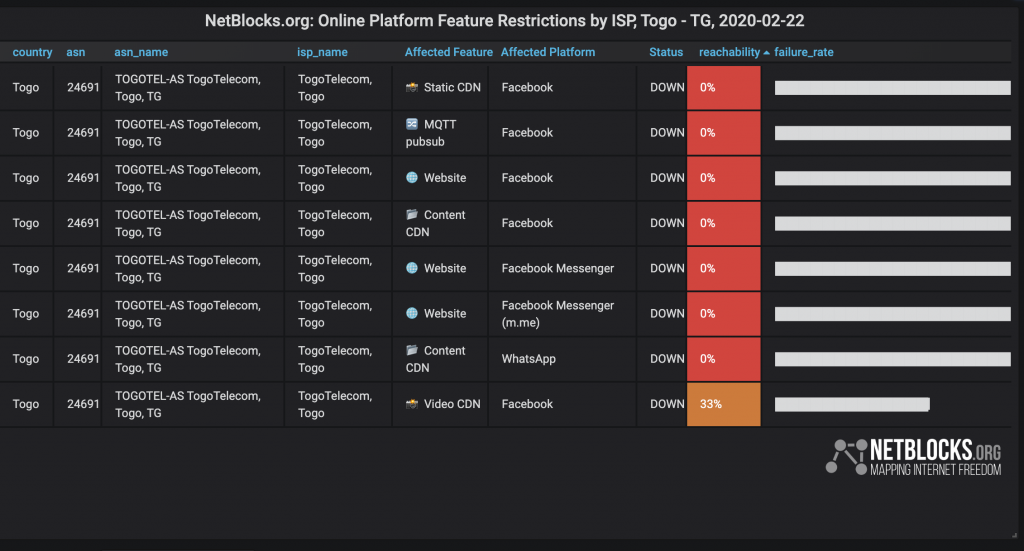 Past disruptions and economic impact

The economic impact of an internet outage in Togo outside of election time is estimated at $266,000 USD, as usage has tripled in recent years.

Togo joins Benin, Mauritania and several other countries in the region that have faced challenges to the democratic process due to internet shutdowns and service disruptions in recent years.

Malawi recently annulled its presidential election results after a judgement on widespread irregularities, during which NetBlocks also identified that networks were partially cut as votes were counted.