Internet access has been totally cut off in Benin as of 11:00 AM UTC, Sunday 28 April 2019, as the country was due to vote in parliamentary elections.

Earlier in the day, providers in Benin blocked access to social media networks and communication apps for several hours, according to network data from the NetBlocks internet observatory. Facebook, Twitter, Instagram and messaging apps WhatsApp, Telegram and Viber were among the affected apps.

Network data shows Benin’s leading internet providers was fully shut down as of 11:00 AM UTC, following the social media blocks imposed earlier in the day:

The move comes as the government has been accused of excluding political opposition, instead authorizing candidates from parties in the presidential camp.

NetBlocks measurements collected by dozens of volunteers across Benin showed that the initial blocks were implemented at the ISP level, with leading network operator Spacetel most impacted. Several VPN services, used to work around network restrictions, were also found to be unavailable through the morning.

Update: Internet connectivity started to return to Benin as of 10:50 PM UTC after a 15 hour nationwide internet blackout. Full access was subsequently fully restored on the morning of Monday 29 April 2019:

Update: Connectivity has started to return to #Benin as of 10:50 PM UTC after a 15 hour nationwide internet blackout on election day #BeninShutdown #KeepItOn ⬇️https://t.co/WHAKSNUDAD pic.twitter.com/3gthpSvvkE

Indications are that the platform restrictions started to come into place approximately midnight universal time. The rest of Benin’s internet connectivity was subsequently disconnected between 9:00 AM and 11:00 AM, preventing information from entering or leaving the country.

Social media has been an important channel for independent political speech in Benin following recent restrictions on independent media and peaceful demonstrations, and messaging app WhatsApp is used extensively by domestic and international observers during elections. Hence, the blocks are likely to have significant impact on the election process.

Concerns over connectivity in Benin have been rising following setbacks to political freedoms during the pre-election period. Last month, Benin’s Internet Society chapter explored the legal and economic consequences a nationwide disruption could have citing research by NetBlocks. 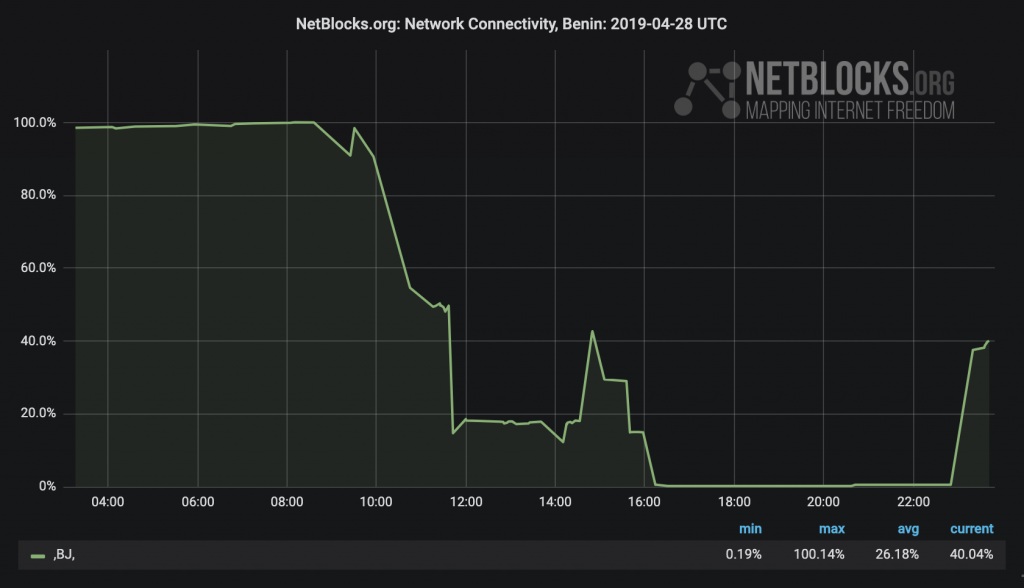