140 hours after the onset of a nationwide electricity blackout, 73% of Venezuela’s telecommunication infrastructure has been restored according to connectivity data from the NetBlocks internet observatory.

The recovery follows a series of setbacks likely caused by load issues in the power grid following the failure of the Simón Bolívar Hydroelectric Plant at Guri Dam, which supplies 80% of Venezuela’s energy. The recovery continues to see ups and downs, attributed to engineering work at electrical substations and equipment resets. 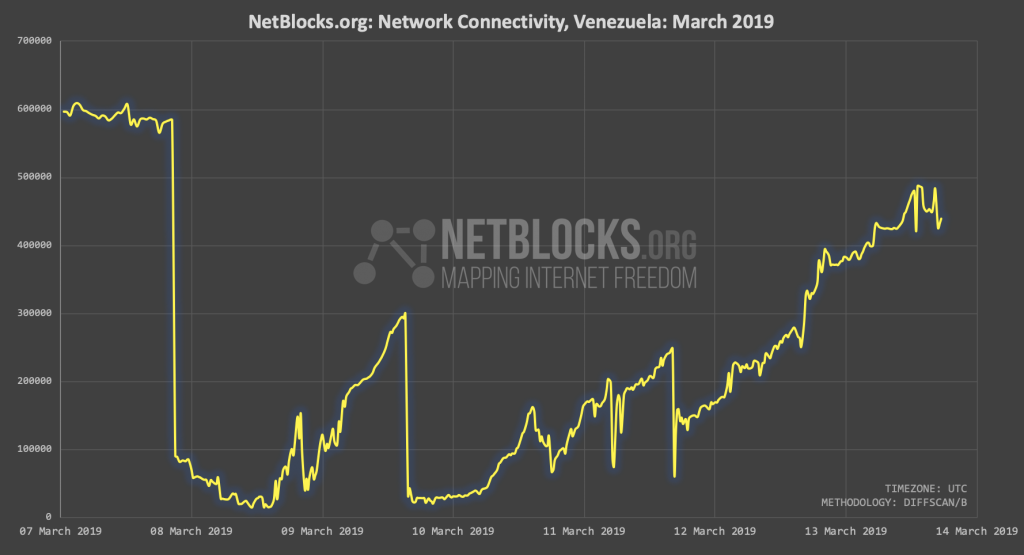 Eastern regions were intermittently reconnected hours after the blackout, while Caracas has started to see a stronger recovery. NetBlocks temporospatial network visualizations show thata other regions have been less fortunate. Maracaibo remained largely disconnected through the entire period, or otherwise experienced only  brief, intermittent power supply:

The regions of Táchira and Mérida have had little to no connectivity or power since the initial outage:

The current outages are the largest measured in 2019 in magnitude and extent, spanning across the capital and all population centers of Venezuela. Hospitals have reported failures and loss of life and the overall human impact to local communities remains unknown.

NetBlocks diffscans, which map the entire IP address space of a country in real time, show internet outages corresponding to power cuts in the region. Network measurements have proven to be an effective measure of disruption to Venezuela’s infrastructure through recent days.

Venezuela experiences frequent power cuts, and Venezuela started power rationing and reduced its electricity consumption to about 14,000 megawatts at peak hours because of the economic crisis in 2018.

NetBlocks has previously observed and reported such outages including the multi-day Táchira blackout on the 2nd March. However the current nationwide outages are unprecedented in magnitude, extent and duration NetBlocks historic data suggest that incidents of this scale are vanishingly rare.