Network data from the NetBlocks Internet Observatory confirm that internet connectivity in Tennessee and Kentucky remain impacted for many subscribers some two days after an explosion on 25 December 2020 in Nashville, Tennessee triggered a series of events that knocked AT&T offline. AT&T is a major provider of home and business broadband, fiber and cellular network connectivity in the region, also serving as the backbone for other consumer services and data centers.

Technical data from the observatory corroborate the provider’s assertions that the outage was not caused by the immediate impact of the explosion, but rather linked to secondary impacts attributable to the loss of power hours after the detonation itself. As such, the shutdown of services occurred in the context of efforts by authorities and engineers to secure the blast site, make the area safe and restore power toward the resumption of business.

Service was largely restored by Sunday evening, with a recorded incident duration of 50 hours.

Analysis: Internet has been cut for many AT&T subscribers in and around Tennessee following an RV blast on Christmas Day.

What happened in Nashville on Christmas Day?

On the morning of 25 December 2020, a parked recreational vehicle detonated around shortly after 06:00 a.m. local time, damaging dozens of buildings on 2nd Avenue, toppling trees and shattering windows in the vicinity of the blast site.

Authorities classed the explosion a probable suicide bombing following the discovery of human remains at the location although a motive was not established at the time of writing. Prior to the explosion, warnings were heard instructing passers-by to evacuate, suggesting that premises and infrastructure may have been specifically targeted in some way or the other. 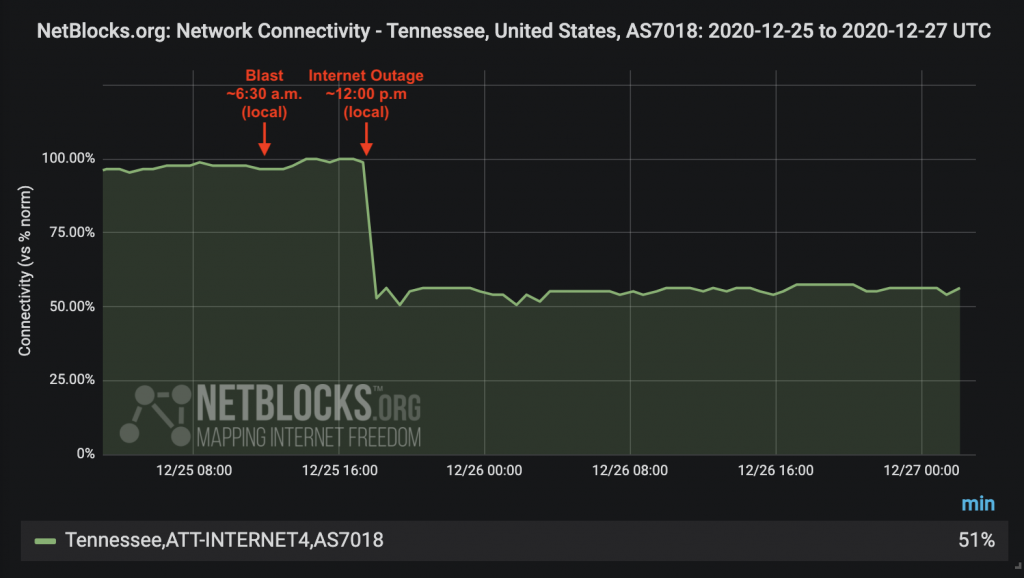 The extended outage sparked discussion over the role of telecommunications infrastructure in the aftermath of crisis situations. It was indicated that generators supplied backup power for several hours after the blast on the morning of the 25th. Given the disparity of timings, procedures to ensure site safety and protect first responders are understood foremost to have been responsible for the protracted outages which sent thousands offline.

Further, on the evening of Saturday, 26 December an AT&T statement provided updates on efforts to restore connectivity, initially via portable cell towers, but also through the full restoration of power to the affected network operations center.

The update describes efforts to drill a new power source to the site, indicating that power mains may have been severed in the initial blast or otherwise damaged in the aftermath of the explosion, leaving technical infrastructure dependent on a finite backup supply that dwindled and became exhausted in the subsequent hours.

In August 2020, a deadly explosion in Beirut, Lebanon knocked out connectivity across much of the country. NetBlocks analysis attributed the outage to the direct kinetic impact of the blast in that case.

Engineers worked to restore internet access around the clock following both incidents. The two crises serve as a reminder of the risks and challenges telecommunications service operators face in the supply of infrastructure to businesses and the general public.

Update: Real-time network data show that internet provider #TerraNet, situated in proximity to yesterday's catastrophic blast in #Beirut #Lebanon, has made a remarkable recovery back up to 85% connectivity in just one day 📈👏