Network data from the NetBlocks internet observatory have identified a series of network outages in Iran from just after 8:00 p.m. local time (3:30 p.m. UTC) Wednesday 8 July 2020. The incident was ongoing as of 01:00 a.m. causing connectivity and platform reachability failures which some users experienced as port blocking or filtering.

Report: Internet in #Iran disrupted due to knock-on effect of power cut in #Armenia

NetBlocks reported a preliminary diagnosis of international origin after identifying that concurrent disruptions had impacted other countries in the region.

Is there any reason to believe those ports were targeted specifically as opposed to a more general outage?

Here's Asiacell in Iraq experiencing a connectivity dip at the same time, for example.

Shortly before widespread complaints started to emerge from Iran, investigations show that Armenian internet providers including Ucom suffered major outages attributed to power fluctuations, also impacting ATMs and other critical systems across Armenia. These failures continued through the evening into the night.

Sadjad Bonabi from Iran’s Telecommunication Infrastructure Company (TIC) issued a statement claiming that Iran’s outages were due to technical difficulties from exchange points in the North. 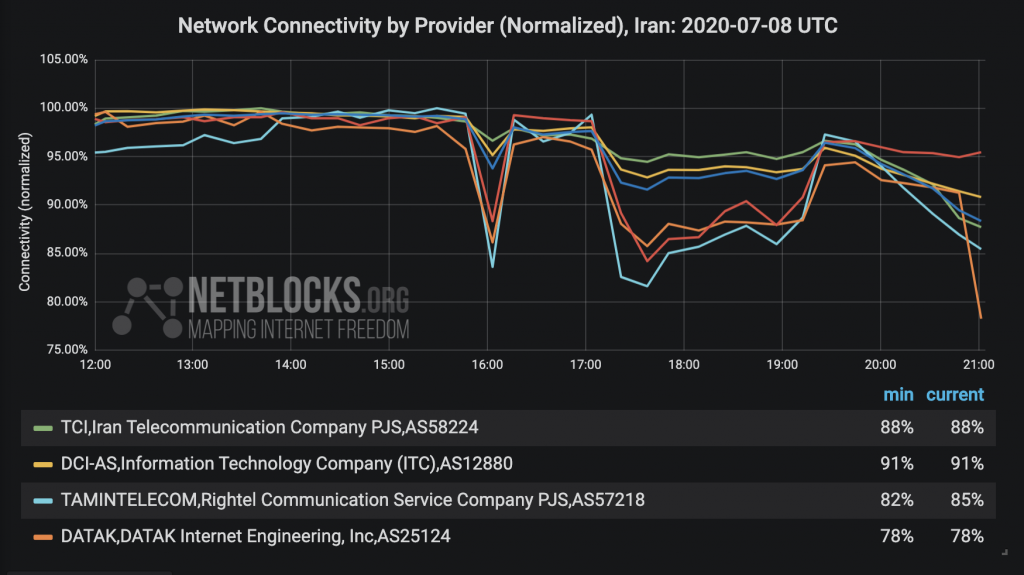 NetBlocks data corroborate the explanation supplied by TIC, indicating that there has been no intentional internet blackout but rather that the power-cut and outage in Armenia resulted in a knock-on loss of international connectivity in Iran.

Iranian operators depend on peering and transit arrangements with neighbors for international routing. In 2016, leaders from Iran and Armenia explored options to establish an Armenia-Iran free trade zone, a task that was subsequently delegated to the private sector. On 27 February 2019, Ucom co-founder Alexander Yesayan and CEO of Iranian Telecommunication Company Majid Sadri announced a partnership to share internet infrastructure between the two countries to create a transit route to Europe that bypasses Turkey and Azerbaijan.

Nevertheless, Iran’s centralization of internet gateways and resolvers is understood to have contributed to the severity of the disruption in this case, highlighting potential problems associated with filtering mechanisms beyond their immediate impact to freedom of expression.

How did VPN services remain effective?

VPN services are typically used to circumvent platform filters imposed by authorities in Iran. However, in this case a technical failure in neighboring Armenia had a knock-on impact on Iranian internet that indirectly caused disruptions with a similar effect to filtering.

Wednesday’s reported failures and network timings indicate that the outages impacted gateway networks that serve parts of Iran’s state filter or “filternet” causing DNS queries to fail as well as resulting in moderate impact to overall connectivity levels and manifesting in latency spikes on several ISPs for over five hours.

Hence, many users were able to regain connectivity via VPN tools during the outage. Despite recent restrictions, several of these services remain operational in Iran and have practical day-to-day uses beyond circumvention and online privacy.

Iran has faced a series of network disruptions through recent months, with some attributed to external factors, and others to state information controls, or internet shutdowns, used to control public protests. NetBlocks investigations have helped identify the root causes of these network outages.

On 8 February 2020 internet access was cut in Iran as a response to a cyber-attack after authorities activated the “Digital Fortress” isolation mechanism.

On 19 December 2019, Iran was one of several countries to be affected by an international network failure that also caused widespread disruption to Google services and sparked concerns about intentional blocking. VPN services were effective in working around technical issues in this case.

In November, Iran deliberately shut down internet access amid widespread public protests. While the shutdown started as a total outage, users gradually regained access as connectivity was selectively brought back.