Network data from the NetBlocks internet observatory confirm that internet access has been disrupted in Zimbabwe on Friday 31 July 2020 for a second consecutive day, following a lesser disruption on Thursday.

The incident was widely experienced by users as a slowdown or ‘throttling’ of connectivity speeds on state-owned network TelOne. Authorities have yet to present a court order or basis for the disruption.

Metrics provide timings of the incidents, which correlate with the times of planned protests: 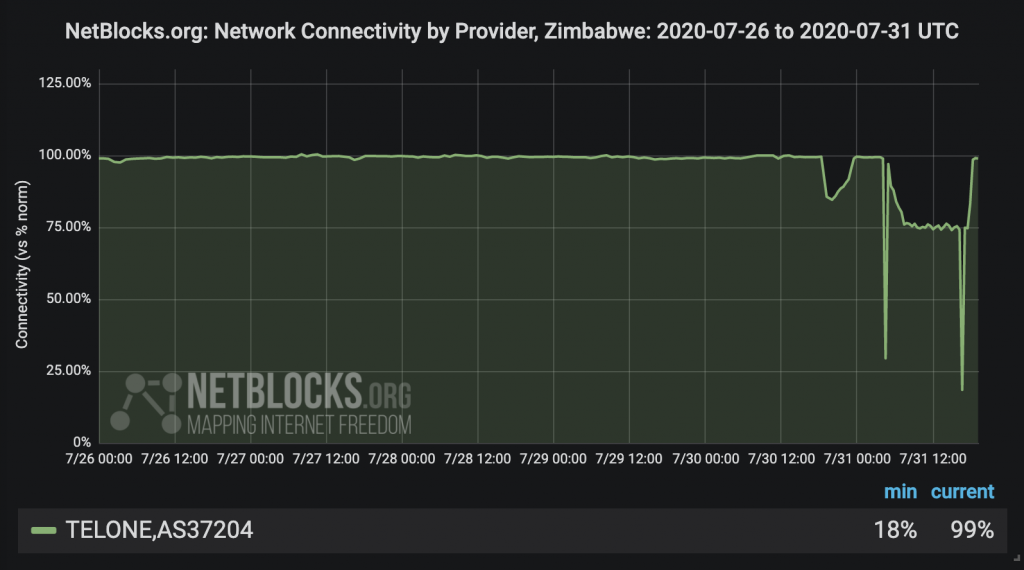 Mass-protests over corruption and the economic crisis only partly materialized as authorities imposed a lockdown to counter the spread of COVID-19 following a series of high-profile arrests and demonstrations on Thursday evening.

Zimbabwe’s government warned that participation in Friday’s demonstration would be regarded as insurrection, and news media covered reports of an internet shutdown order hours before incident onset.

While there was no total telecommunications blackout and observed privately owned operators were unaffected, technical data provide evidence of a partial disruption on state-run networks that limited coverage of incidents and arrests.

Technical data corroborate hundreds of user reports detailing difficulties accessing online services during the period in question. Subscribers additionally note that the service provider’s help desk was unresponsive, while VPN services were found to be effective in circumventing the disruptions and restoring access to social media.

Just noticing that @TelOneZW internet has improved, this is after a whole day of slow and erratic internet connection.

@TelOneZW kindly explain why you internet is slow today. Taking minutes to load a tweet

On 15 January 2019, protests against the rising price of fuel swept Zimbabwe triggering a political backlash. NetBlocks reported internet shutdowns which rapidly proceeded to have nation-scale impact.