The NetBlocks internet observatory has detected multiple outages in Zimbabwe, including network infrastructure disruptions as well as the apparent blocking of over a dozen social media platforms and major websites as of 15 January 2019.

A network shutdown has taken much of Bulawayo offline as of the 7:00AM morning of the 15th, and continued to extend to other parts of the country by 8:00AM, impacting TelOne and Econet.

From 11:00AM further disruptions have placed further significant limitations on the flow of information in and out of Zimbabwe. NetBlocks continues to observe localised service blocking as well as the major shutdowns, based on 30,000 probe tests and 20,000,000 IP tests.

The progression the network disruptions can be clearly seen from the temporospatial visualisation of network reachability of 5,000,000 network addresses through the morning:

Providers affected by the website restrictions include ZOL Zimbabwe and NetOne Mobile.

By Wednesday morning, a fourth set of disruptions sent some of the last remaining internet connections in the country offline, with capital Harare dropping off significantly.

Update: This view of #Zimbabwe's IP space shows how internet has started to return from 2:30PM UTC; however web probes continue to show a degree of social media restriction #KeepItOnZW #ZimbabweShutdownhttps://t.co/svNQeLresu pic.twitter.com/okHGaEscnL 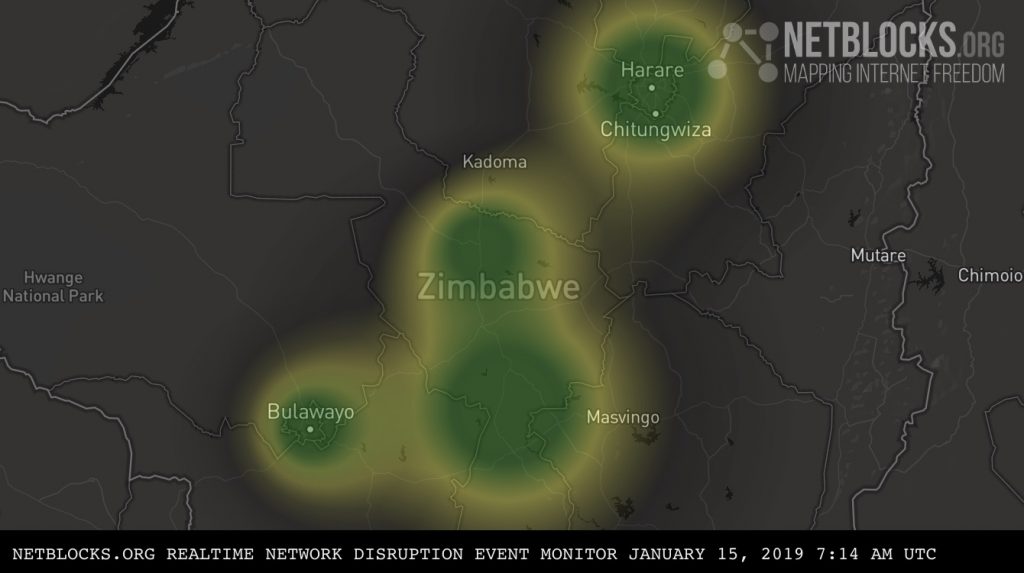