Network data from the NetBlocks internet observatory show that Facebook, Twitter, WhatsApp, Instagram and other social and messaging apps have been blocked in Iraq by multiple internet providers as of 12:30 UTC, Wednesday 2 October 2019.

Update: 4:00 UTC Tuesday 8 October 2019: Internet access is partly restored for a fourth time while social media and messaging remain blocked with most providers, and some mobile networks remain down. As in previous instances, it is unknown if the restoration will be sustained:

Update: Internet is partly restored in #Iraq as of 4:00 UTC, back for the fourth time since the shutdown began on Wednesday amid widespread protests. VPN services remain effective as a means to circumvent social media and messaging restrictions 📈

Update: 22:00 UTC Monday 7 October 2019: Iraq has cut internet access again with connectivity falling to 22% of normal levels, the lowest observed since the crisis began with some fixed-line providers and mobile operators now totally offline. Access was partially restored for six hours during and after President Salih’s speech:

Update:  17:30 UTC Sunday 6 October 2019: It has now been over 100 hours since Iraq imposed a near-total internet shutdown amid widespread protests. During that time, connectivity has only been restored briefly on two occasions:

Update: It has now been 100 hours since #Iraq imposed a near-total internet shutdown amid widespread protests; the disruption comes at a critical time when Iraqis most need a voice⏱

When connectivity returned, network reachability data from Iraq’s ISPs showed that leading internet service provider Earthlink continued to block social media and some messaging apps (including some WhatsApp, Telegram and Signal servers), while some other companies had lifted the restrictions:

The restrictions come just as hundreds have been reported wounded as police fire tear gas, bullets at protesters.

Technical measurements show that each of the services have been intentionally restricted by leading Iraqi network operators including Earthlink, Asiacell and Zain in a manner consistent with previous incidents of censorship in the country. Findings are based on a set of technical measurements from across the country assessing reachability and network performance.

Update: Internet access has been cut across much of Iraq including Baghdad as of 17:00 UTC, following the earlier blocking of social media platforms. NetBlocks diffscan measurements which map the IP space of a country show significant impact across multiple providers. Nationwide connectivity has fallen below 70% and outages continue to spread:

Update: As of 19:30 UTC Iraq has gone largely offline amid widening mass-protests, with the situation on the ground unclear due to blackouts. Real-time network data show approximately 75% of the country including Baghdad is now offline, excluding autonomous regions which operate their own networks:

Instances of network filtering and outages present a significant challenge to media freedom and the rights to free assembly and free association in Iraq.

Why are Iraqis protesting?

Demonstrators are out on the streets over unemployment, corruption and poor public services, focused in capital Baghdad but also impacting other cities around Iraq.

The protests have escalated after police opened fire in the air as some 3,000 protesters tried to cross a bridge leading into Baghdad’s fortified Green Zone, where government buildings and foreign embassies are based.

Is the internet down in Iraq?

Yes, largely. Restrictions were initially limited to specific online platforms and at first there was no sign of a wider nationwide internet blackout. However total outages began from 17:00 UTC, and by 19:30 UTC much of Iraq fell offline (see updates, above).

Geographic impact covers Iraq’s centrally administered cities including Baghdad, while independent zones such as the Kurdish northern cities are governed under a different system unaffected by the restrictions.

Iraq has previously extended social media disruptions to total shutdowns, hence the situation has been considered volatile by the observatory from its onset.

On Wednesday afternoon, WhatsApp and Facebook Messenger remained partially usable via mobile phones on some of the affected networks for some time. This is due to circumvention measures and alternative messaging protocols built into recent versions of the mobile apps. In such cases service quality and performance of media, photo and video transfers are generally degraded. 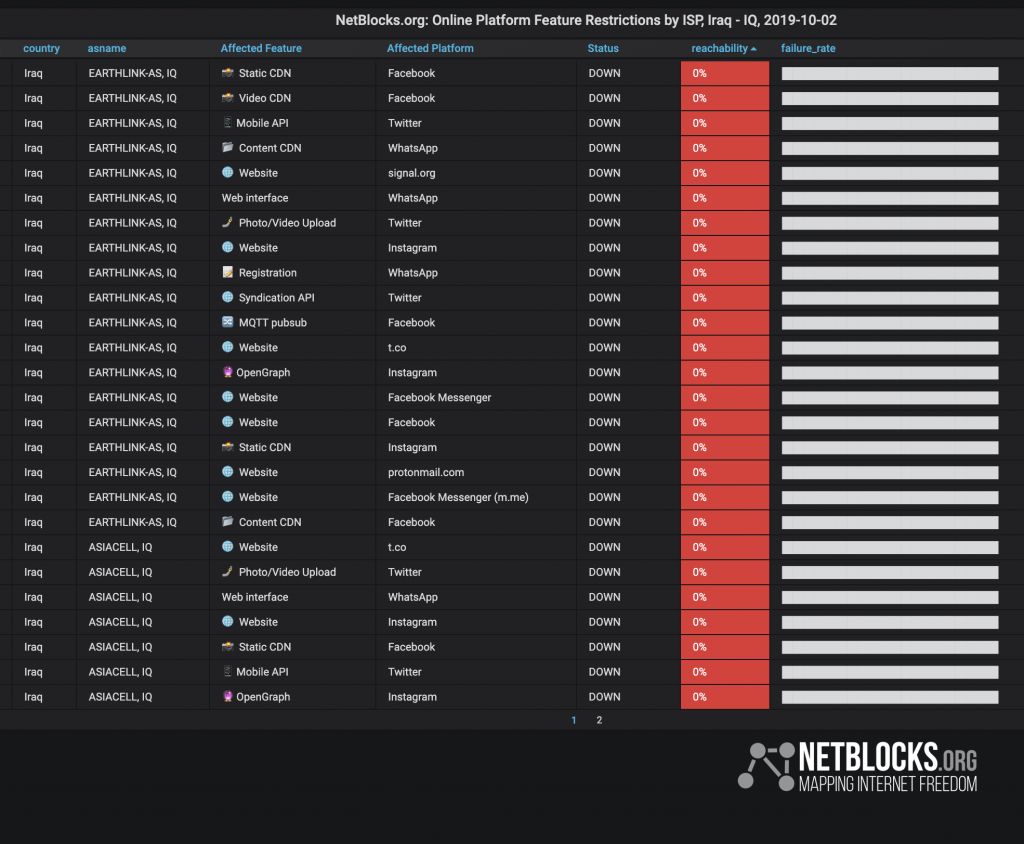 Developing incident. Article will be updated as new data is processed.