Data collected by the NetBlocks internet observatory in collaboration with volunteers across Iraq since Friday present new insights into the variety of internet restrictions that have been implemented to suppress protests.

We are publishing new data showing multiple methods used by #Iraq to suppress internet access during #IraqProtests, varying across different regions of the country #KeepItOnhttps://t.co/KrcYxxnfS2 pic.twitter.com/J80L4iOMoZ

For the first time, the study provides data on the extent of different information controls that have been used in the cities and provinces of Iraq.

The protests originating in Basra amid growing anger in Iraq over poor public services and widespread corruption have continued to spread, turning deadly with the killing of protesters by Iraqi security forces on Saturday.

Iraq is known to use internet controls to suppress dissent, provide operational security during conflicts, and even as a measure to prevent cheating in school exams. Internet users reported internet connectivity disruptions beginning on Saturday the 14th of July.

Connectivity returned briefly between 20:00 UTC and 22:00 UTC Sunday before a second ongoing blackout commenced, as shown by real-time network scans. The brief restoration made it possible to determine that the social media restrictions, first observed in Northern Iraq, appear to be implemented nation-wide.

Shedding light on the nature of these disruptions, the NetBlocks network measurements give depth to reports both of a full internet shutdown and of partial restrictions, including social media blocking, emerging from distinct regions of Iraq during the ongoing crisis.

A full internet shutdown is in place affecting the largest population centres of Iraq and most provinces, including much of Baghdad, all of Basra and Kirkuk.

NetBlocks scans indicate that the internet has remained on in other areas including predominantly Kurdish regions of northern Iraq including Irbil, which exercises a degree of autonomy from central government. 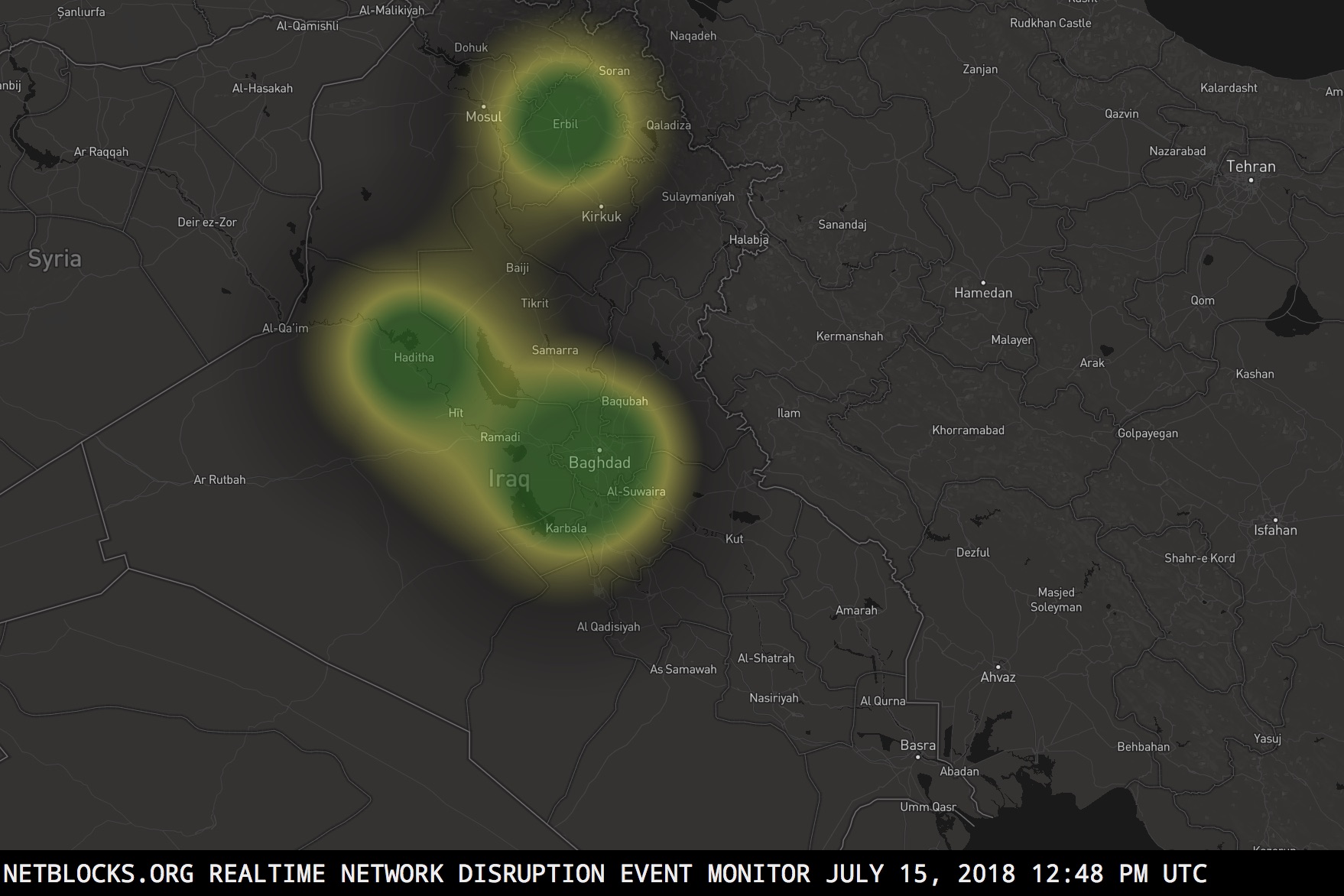 Web probe scans show that social media including Twitter and Facebook and some messaging apps are restricted in those regions unaffected by the full telecommunications blackout indicated green in the map visualization.

Impact on right to free expression, assembly and economy

NetBlocks notes that internet shutdowns are harmful to local communities and cause damage to economic development, an important factor in fostering and sustaining peace.

The ongoing internet shutdown may be costing #Iraq’s economy some $40,000,000 per day in lost business according to the @netblocks/@internetsociety COST tool #IraqiProtests #KeepItOn https://t.co/n4R7FTQ44Q

The present internet shutdown may cost Iraq’s economy some $40,000,000 per day in lost business, sales and opportunities as it enters the working week according to figures from the COST tool based on the Brookings Institution economic impact methodology for internet shutdowns.