Network data from the NetBlocks internet observatory confirm that Twitter, Facebook and Instagram, and messaging apps have been restored for many users across Iraq on 21 November 2019. The services were blocked fifty days ago by most internet providers in south Iraq as protests swept the country.

At the time of writing, network data show that access is restored by leading fixed-line/wifi internet provider Earthlink. There are also signs of recovery with mobile operator Zain, however overall connection quality and performance remain poor across most of the country, particularly with cellular networks.

Work is ongoing to identify other restrictions that remain in place across multiple service providers.

Iraq blocked social media platforms and restricted messaging apps on 2 October 2019. The restrictions were shortly followed by a near-total internet shutdown that cut off Iraq as protests escalated and evidence of targeted killings of protesters emerged.

The near-total shutdowns were implemented  through much of October, and again through early November. Even at times internet access returned, social platforms remained blocked and overall service was highly slowed for most users: 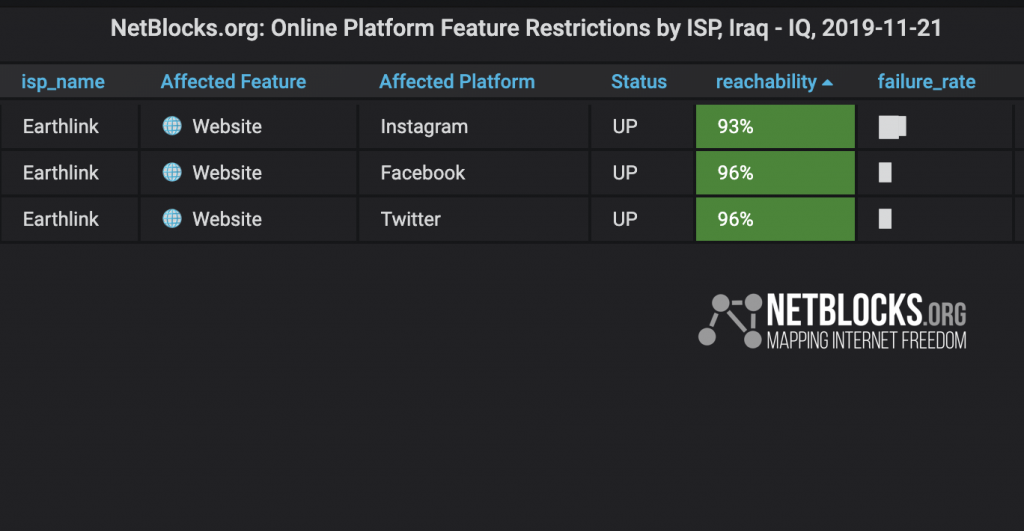