Network data from the NetBlocks internet observatory confirm that Iraq has introduced a nighttime internet curfew, consistent with reports from IT industry workers in recent days.

Confirmed: #Iraq has partly restored internet access at 7:00 a.m. Baghdad time for the 3rd consecutive morning, making it the first documented country to introduce a nightly internet curfew at nation-scale.

Measurement data show that internet access has been systematically cut for the second consecutive night between the hours of 5:00 p.m. and 7:00 a.m. Baghdad time (14:00 UTC and 4:00 UTC). The return is the third consecutive restoration of access to take place at 7:00 a.m.

Iraq enters internet history as the first recorded country to implement a systematic nighttime curfew at nation-scale by cutting and restoring internet access at the same times for two consecutive nights.

However, the practice has been previously observed at smaller scale. In 2016, digital advocacy group Bahrain Watch documented the first recorded internet curfew between 7:00 p.m. and 1:00 a.m. each night in the village of Duraz where there had been ongoing protests.

The dubious record for first documented nightly internet curfew at subnational scale goes to the restive village of Duraz in Bahrain, which in 2016 cut access between 7:00 p.m. and 1:00 a.m. each night for more than 100 days, as documented by @BHWatch 🏅https://t.co/l01T4mQNWZ

It is believed that Iraq has introduced formal curfew times after push-back from industry, which has incurred costs spiralling into the hundreds of millions as a direct result of the internet disruptions, estimated using figures from the COST tool.

Update: Like clockwork, internet access has been cut again across most of #Iraq as of 5:00 p.m. Baghdad time (2:00 p.m. UTC) as part of a government order that bans communication outside of office hours ⏱📉 #IraqProtests

Update: #Iraq has partly restored internet access as of 7 a.m. Baghdad time in compliance with an internet curfew imposed between the hours of 5 p.m. and 7 a.m. each night.

Social media and messaging apps remain restricted, as do most mobile networks. 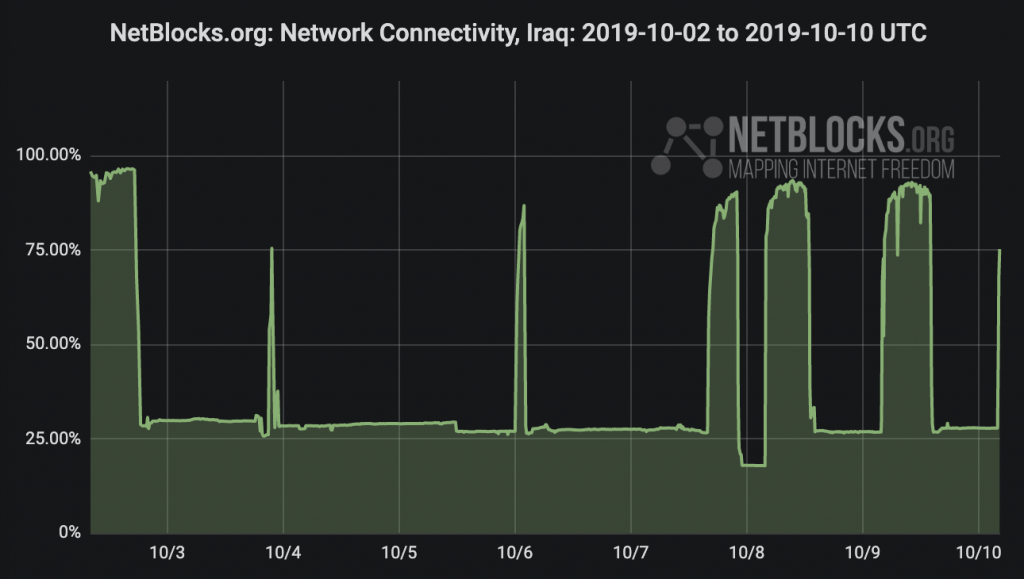 NetBlocks' methodology sets standards for the diagnosis and classification of internet curfews and curfew-style network incidents. A series of disruptions qualifies as a curfew in either of two conditions:

A curfew-style pattern is a series of incidents that meets the first criterion in the absence of technical or geopolitical implication of intent.