Network data from the NetBlocks internet observatory show that connectivity is returning to parts of Iraq 28 hours after the country imposed a nationwide information blackout. As of 9:20 p.m. UTC, Thursday 3 October 2019 leading providers started to come back online, however access to social media, messaging apps remain highly restricted with some network providers.

Update: 17:00 UTC Monday 7 October 2019: As of hour 119 of the shutdown, internet access is largely restored for the third time. Social media and messaging remain largely blocked. It is unknown if the restoration will be sustain. See main article: Iraq blocks Facebook, Twitter, WhatsApp and Instagram, then shuts down internet amid civil unrest:

Update: Connectivity has again been cut as of 10:00 p.m UTC, and remains off at the time of writing. The brief restoration came after as Prime Minister Abdul-Mahdi prepared to televise a speech to the nation. However, by the time the PM’s delayed speech appeared on screen, internet access had already been shut down again following the emergence of new videos of clashes:

Update: #Iraq has cut internet access again from 22:00 UTC, one hour after connectivity was partially restored. The fluctuations come amid reports that Prime Minister Abdul-Mahdi had been planning to televise a speech to the nation 📉

Following Thursday’s brief restoration, data show that leading provider Earthlink continues to block services while smaller ISPs such as AlJazeera Network have lifted the platform blocks. Approximately 40% of connections remained offline at the time of writing. Data also confirm that connectivity remains unaffected in autonomous Kurdish regions in the north of Iraq.

Facebook, Twitter, WhatsApp, Instagram and other social and messaging apps including Signal and Telegram were blocked or degraded in Iraq by multiple internet providers from 12:30 UTC, Wednesday 2 October 2019 and the country subsequently cut off most internet access.

The first restrictions came on Wednesday just as hundreds have been reported wounded as police fire tear gas, bullets at protesters.

Technical measurements show that each of the services were intentionally restricted by leading Iraqi network operators including Earthlink, Asiacell and Zain and smaller providers in a manner consistent with known incidents of censorship in the country. Findings are based on a set of technical measurements from across the country assessing reachability and network performance. 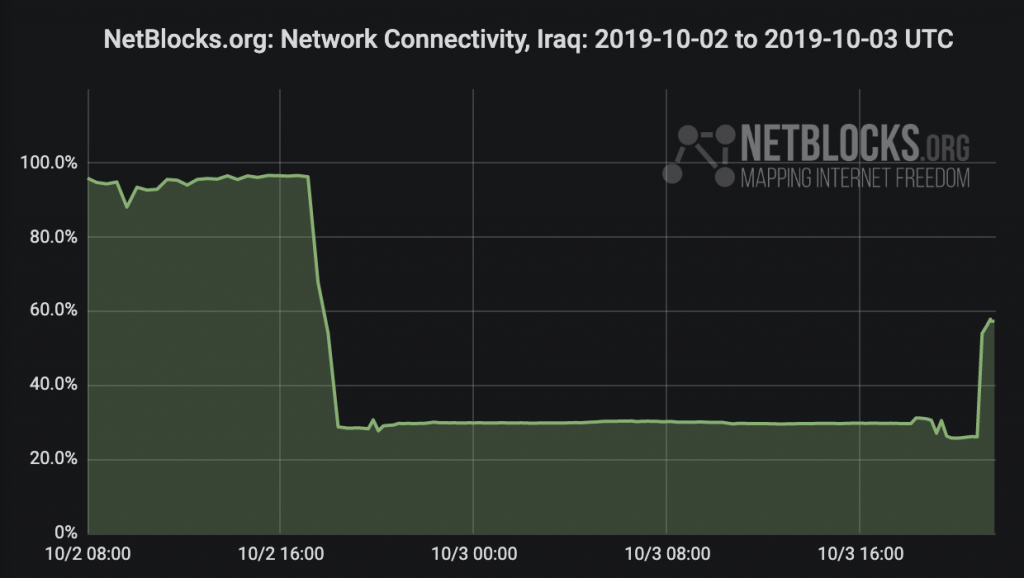 Breaking incident. Article will be updated as new data is processed.